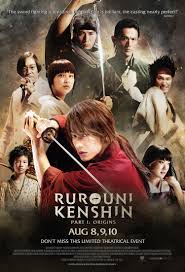 With another entry into “why the hell didn’t this get a full US release earlier,” Rurouni Kenshin (or as the new US release is called Rurouni Kenshin - Part I: Origins) finally drops on home video via Funimation and after watching it I have to ask that question again. Truthfully, there are a lot of things about the film that would make a company feel hesitant to release the film including that it’s a live action adaption of a well-known anime and it’s a samurai action film which can be hard to sell to the general US public. However, the film is phenomenal. The first part of a trilogy, all of which have already gotten a release in Japan, Rurouni Kenshin takes a lot of classic Japanese samurai themes and imagery and powers it with a quirky sense of timing and then wraps it all in ridiculously high energy sword fighting action sequences. Sure, the film with its strong sense of Japanese history and culture can be a tough sell for American audiences, but the film is so impressively executed that it comes with some of the highest recommendations we can offer here.

Kenshin (Takeru Satoh) has been a wandering swordsman for the last ten years since he gave up the life as a killsword in war. However, as he enters Tokyo, he hears rumor that he is being blamed for a series of vicious murders that have been committed under the guise of his old name, Battousai. With the help of a young swordswoman (Emi Takei), an old rival from the war (Yosuke Eguchi), and an ex-con brawler (Munetaka Aoki), Kenshin will have to uncover a larger conspiracy from an evil businessman (Teruyuki Kagawa) and put a stop to it. All the while as a ghost from Kenshin’s past threatens to make him kill once again…

For the record, I am not familiar with neither the manga nor the anime that were the previous two mediums that Rurouni Kenshin has appeared in. That simply means that my experience with this film is one from a fresh perspective and comparisons to how the story, characters, or style will not be a portion of this review. Keep this in mind, if you are a fan of the anime and/or manga. On its own though, from the perspective of a newbie, Rurouni Kenshin is just downright entertaining and impressively effective as a film. The key to a lot of the film’s success is the combination of classic samurai elements with a ton of modern tone. At its core, the film owes as much to series like Zatoichi, Yojimbo, and Sword of Doom as it does to anything modern in its blend of humor, action, and heart. The use of a wandering and soul torn hero is not new, but it’s refreshingly old school in a way. The character and the performance of his by Satoh who ably navigates the subtle details of such is a dynamic one and one that is worthy of following in this adventure that plays out. Even with his smaller stature, the way that director Otomo films his movements and emotional tone makes him a massive screen presence and it makes this film work even when it is cheesy or over the top. The imagery that follows this old school character is just as striking too as it focuses down on quick bursts of action that is followed by moments of silence and/or stillness. It’s classic samurai film in this manner, but its balanced with a character that can be humorous and heartfelt at the same time in modern ways.

However, despite the strength of Kenshin as a lead, the film owes just as much credit to its layered story and secondary characters. Otomo is able to balance a fairly robust plot, one that utilizes flash backs and its occasional fantasy elements, with a slew of characters to craft a strong sense of universe for the film. Even smaller characters, like Kenshin’s rival/friend who works on the police force, are given such strong character traits and executed in such effective ways that none of them feel like throwaway roles. Even when his brawler friend, played with a bigger than life performance by Aoki, shows up fairly late in the film, he’s done with such finesse that he ends up being one of the best parts of the film. This happens again and again and the world building with its complicated murder mystery plot that bleeds into the cliché evil businessman one is just so expertly executed that it’s hard not to be sucked into the entire thing. It has these visual and stylistic quirks, many that reminded me of Takashi Miike as a director, that only adds to the fun and its these details that really make everything flow. Rurouni Kenshin is built on some solid foundations, for sure.


It also has to be mentioned in this review that the action in Rurouni Kenshin is spectacular. Unlike many of the classic samurai films that Kenshin homages, this is where the film deviates the most and it still works. Instead of the brief bursts of sword slashing violence that graced the films previously mentioned, Kenshin probably owes more to the Hong Kong realm of wuxia than classic Japanese cinema here. The sword battles are massively diverse, complex in their choreography, and jaw dropping in its execution. There are war like battle sequences, complete with sword on sword trench warfare, fist to fist brawls, a siege, and enough sword work to shake a stick at that features high flying wire work. As if it couldn’t be topped, Kenshin does throw in a classic samurai showdown in the end that might just be the cherry on top of the action sequences. Action fans rejoice because Kenshin delivers on all fronts with the action along with the characters and story.

Now that Rurouni Kenshin is released and it's obvious at how damn good it is, it only raises more questions about why it took so long to get a US release. Hopefully, it sells quite well on Blu Ray, as it comes with some of the highest recommendations we can offer, and the sequels can match it blow for blow in its ability to drive a great story, well executed and memorable characters, and bombastic action. Rurouni Kenshin is easily one of the best films of the year and it would have been one of the best films from five years ago if it got a release quicker. However, let’s be grateful that the film received a release at all. It is a welcome addition to my film collection.