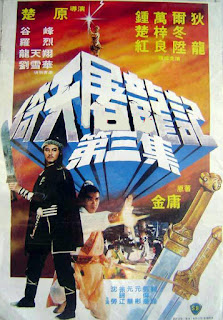 During my recent Shawtember binge that saw a serious round of Derek Yee Shaw film consumption (ultimately leading up to my article over on the Celestial Pictures site HERE), I ended up reviewing the first two Heaven Sword and Dragon Sabre films. While neither film necessarily blew me away, falling to be some flawed films in the usually fun and dynamic filmography of director Chor Yuen, they were still decent films that got better as they went. The third film in this franchise, called The Hidden Power of the Dragon Sabre because I guess that Heaven Sword was not worthy of making it into the title this time around, comes six years after the first two. Six years doesn’t seem like a long time for many franchises, but in the realm of Shaw Brothers this meant a huge difference in tone and style. Hidden Power doesn’t necessarily work all the time, it fixes a few issues from its predecessors and falls into a few new traps, but it is perhaps the most entertaining of the three films just in sheer outrageousness.

Chang Wu Ji (Derek Yee) has been trying to maintain a peaceful stance between his Ming Clan and the rest of the land. However, when an old villain reappears looking to match Wu Ji in his martial arts abilities he uses a hot-headed Mongolian general (Ti Lung) and a Mongolian princess (Cherie Chung Cho-Hung) to steal the Heaven Sword and Dragon Sabre to gain more power. Now it’s up to Wu Ji and the Mongolian general to team up, discovery an ancient prophecy, and stop the villain before he becomes the most powerful man in the kingdom.

Those martial arts fans who are familiar with the style that Shaw Brothers shifted into for their wuxia films in the 80s knows just how Hidden Power is going to be different from its predecessors. That is, it takes its over the top elements and gives them a manic tone and slathers them in visual effects. While Hidden Power doesn’t go quite as far as films like Buddha’s Palm, it does go full out with its Star Wars inspired use of lasers and it has enough explosions to make Cannon Films take notice. When it comes to the action sequences in this film, it does not pull away from them either. It’s high flying, fantasy fueled preposterousness throughout. It’s still very much a wuxia and director Chor Yuen loves to give them massive fog riddled sets to fly around in – including a strange cave chamber filled with traps that make little sense and use a lot of visual effects. Fortunately, this over the top style of wuxia action makes the film gloriously entertaining and it’s powered by a cast that is more than willing to embrace the stranger aspects of its story and style. The villain uses all kinds of gimmicks including a small boy dressed as an elderly man who digs through the ground randomly stabbing things and it just makes things so much fun to watch. In that sense, Hidden Power earns some credit for being as much fun as it is.

The Hidden Power of the Dragon Sabre, unfortunately, doesn’t have the writing to live up to how entertaining it is one its surface levels. Like the other films in the franchise, this one tries to stuff a lot of material into its short run time. On the plus side, it’s not nearly as epic in the core story it is telling, but it does require its audience to know quite a bit of the story and pieces from the first films and the strange combination of montage and narration in the opening does not help at all. There are a ton of characters that randomly show up, like the all time awesome Bat King, that if you haven’t seen the first two it will be quite confusing. To add some difficulty to the matter, Hidden Power tries to balance the film with dual leads, but doesn’t necessarily have the time or focus to accomplish the task. Truthfully, Ti Lung as the Mongolian general gets a bit more of a character arc that works than Derek Yee does. Even then, it’s not all that robust and tends to be predictable in its execution.

All in all, the Heaven Sword and Dragon Sabre franchise is not the best one that the Shaw Brothers studio has produced, but this third entry into the series does come off as the most entertaining and memorable of the three. It’s hardly a great wuxia film, particularly coming from the Chor Yuen, Derek Yee, and Ti Lung camps, and the patchy writing and character builds undermine a lot of the manic and explosive action sequences that keep it moving. For those looking for the 80s-style insanity of a Shaw wuxia film, Hidden Power works there and that should be the focus for anyone going into this film. If you do that, then this film is worthy of the watch.