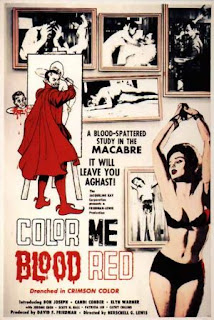 Going into the fifth film of the Feast box set, there was some decently high expectations to go with Color Me Blood Red. The concept of a mad artist who becomes obsessed with using blood as a red paint fits right into the Herschell Gordon Lewis splatter film concept and the film is regularly referenced as part of his “blood trilogy” that is completed with Two Thousand Maniacs and Blood Feast (both of which I enjoyed). However, when compared to two films that are used in this trilogy, Color Me Blood Red is easily the weakest film and one that suffers from a lack of focus and a mixed intent. It’s fun, but hardly the quality that it might have had.

Much of the issues that arise in Color Me Blood Red is that the film doesn’t seem to know if it wants to be fun and silly or take a serious angle for its mad artist character. For every scene that has kids on the beach making jokes and an artist critic making over the top judgments about art, there is a scene where we see our lead – played with decent if not also over the top effect by Oas-Heim - as an anguished character study about a torn man with no connections to the real world. So what’s the problem? The film doesn’t spend enough time on either to justify itself. The silly slasher pieces, which includes a boat killing, feel out of place when set next to the more serious moments. The serious moments are then not explored in ways that deepen the overall narrative. The film just rocks back and forth between the two, failing to build any of the side characters (the teen couple needed a lot more development for the final act to work) and it just comes off as a silly splatter film. For many, this is okay and when the film is fun it’s energetic, but ultimately the film doesn’t work nearly as well as it might have. 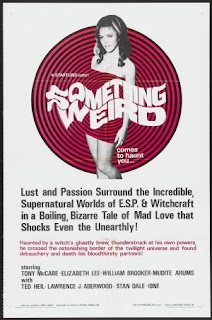 Like the last film I watched from this Herschell Gordon Lewis Feast box set, Something Weird has two ideas that are rattling around inside of this film and it simply has trouble figuring out how they fit together in a more naturalistic manner. On one hand, there is kind of a fun murder mystery where our lead gentleman, granted ESP powers in a freak electrical accident, is sent to Michigan to find a serial killer. When the film is working on this, it's much better than it has any right to be and it has a great little twist in the final act to solidify some of the potential it carried. The performances range from fun to downright irritating, so keep that in mind even in many of the better sequences, but even that is par for the course when it comes to a Lewis film.

However, this is spliced in with a secondary plot of our lead psychic gentleman also being in debt to a witch (?!) whom travels with him and generally just seems there to be a plot deviation that's not really needed. She even has a romantic...ish...subplot. I kid you not. Granted, the witchcraft and supernatural aspect adds in a bit of that HGL cheese into the proceedings (and gives the film that exploitative twist in moments where the film needs an energetic kick), but it does siphon away time and energy from a potentially fun detective story for a horror/fantasy angle that never really works. Something Weird has a lot of potential, but it's also too scattered.