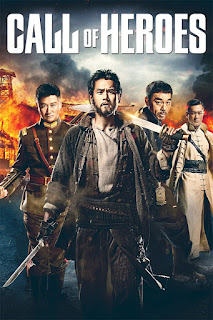 From the time that it was announced, under the title The Deadly Reclaim before it was changed to Call of Heroes, there was a lot of hype behind this film. Between the stacked cast of current A-list actors, the legendary Sammo Hung as action director, and Benny Chan behind the director’s chair, this film was going to have to live up to a lot of expectations. With a concept that can be described as a wuxia western, Call of Heroes lives up to a lot of those expectations in many surprising ways. The film is one that had to sit with me for a while before writing this review because many of its themes and approaches were ones that didn’t necessarily strike home initially, but blossomed over a bit of time and reflection. Call of Heroes is not a film for everyone, particularly those who are unable to jive with modern Chinese cinema’s use of spectacle and CGI, but for those looking for a solid entertaining time with some shockingly creative results than this film fits that just fine.

It’s the early 1900s and the world is crumbling. War is everywhere and even for a small town it has had a large impact. When the vicious son of a warlord (Louis Koo) commits a series of murders in the village, he is easily sentenced to death by the local sheriff (Sean Lau) and his team. However, things are not always that easy and the warlord’s men vow to kill everyone and destroy the village if they execute their prisoner. Decisions must be made, sides will be chosen, and questions will be asked. What is the cost of justice?

To describe Call of Heroes as a wuxia western is pretty damn accurate. The relationship between the two genres (and that of the classic samurai and chanbara films from Japan) is one of give and take influences throughout the years, but here Benny Chan looks to meld the two together into a slick and smooth hybrid. Stylistically, it’s a ton of fun in many of the approaches he takes to it. There are tons of high flying wire work displays of martial arts fun, but the film packs in a lot of western pieces into its focus too. A wandering warrior (played with tons of charisma and effectiveness by the always impressive Eddie Peng) fulfills many of the western clichés as he rides into town on his horse to find a village in strife and must establish a tentative relationship with the local sheriff. Sean Lau plays this sheriff and in true fashion, he plays it with an almost over the top seriousness and stiffness for justice that balances the more comedic pieces from Peng.

However, this is where Call of Heroes does something interesting. For the most part, it plays its characters and plotting in an over the top manner. Peng is almost comedic in his bearded wanderer role and Louis Koo might win the award for most horrifically evil villain of the year, whose weird cackle just solidifies how ridiculously monstrous he is as a remorseless and entitled villain. Then the film spends key moments in the film breaking down many of the clichés and breaking small conventions. Instead of being steadfast in his justice, at one point the sheriff steps down. Our comedic wandering swordsman has a back story with one of the evil henchmen, played with screen stealing focus and ferocity by Wu Jing, and their relationship works to add a surprising amount of depth to both. Time and time again, there is a weird ability to add a darkness, seriousness, and depth to the cartoonish elements of the film that doesn’t undermine either aspect. My first viewing of the film was focused more on the surface level Hong Kong nature to push things into ridiculous realms, but the more that the film sat with me, the more those nuanced pieces of breaking convention stuck out as the highlights of the film. This is why Call of Heroes works so well with its blend of classic cinematic bones and modern spins. It will also make it a film I revisit time and time again.

This even stretches itself into many of the action set pieces. Some slightly inferior CGI can occasionally ruin some of the fun, including the fight between Eddie Peng and Wu Jing, but again it comes off as a blend of western and wuxia that’s fun and strangely effective in spite of the CGI. I love the use of classic swords, whips, guns, and hand to hand combat in the film – courtesy of the legendary Sammo Hung who uses his abilities and timing to leap between the dramatic, funny, and dangerous darkness all within the film – and it makes for an over the top spectacle that’s filled with high flying stunts and relentless gimmicks. It can be occasionally flawed by CGI or some modern quick edits, but for most of the action in the film it works in that same balance of skimming the old and new for a great balance.

Call of Heroes just continues to prove that Benny Chan understands the history of Chinese cinema and proceeds to take that and blend it with where the industry is moving forward. It helps when this film has such a fun concept and some clever writing to go with it. The film is more charismatic and fun than it is a film that truly earns its colors from its dramatic punches, but it does enough of both to give it a deeper layer that unfolds as the film plays on. It may not work for all martial arts fans with its modern spectacle, but it still gets a strong recommendation for its blend of classic and modern elements as a charismatic modern action flick.