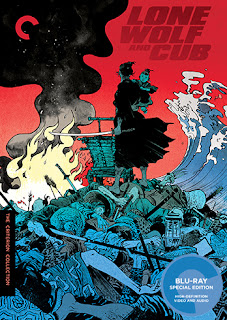 Is it that strange that director Kenji Misumi would want to take a break from directing Lone Wolf and Cub movies after making three of them in one year? Not at all, but the fourth film in this acclaimed franchise could have used his talents in executing its concept. Lone Wolf and Cub: Baby Cart in Peril is easily the weakest of the films in the new Criterion box set thus far, continuing a downward slide in quality for the series since the second one, and it sincerely misses a lot of the artistic merit that Misumi would have brought into the fold. The film is still outrageously entertaining, almost to the point of reaching new heights of silliness for the ultra-violent series, and deserves some credit for making a lot of its flaws into enjoyable tidbits of grindhouse fun, but it suffers greatly from an overly complicated plot and lacks the focus to drive home its better concepts and characters.

Lone Wolf (Tomisaburo Wakayama) and his son (Akhiro Tomikawa) continue on their journey upon their ‘path to hell’ and take a new assassination assignment: to find and kill a rogue woman who has been killing specific samurai and swordsmen left and right. Her only feature is that she is tattooed on back and front. While the two assassins uncover more about her plight though, an old face from Lone Wolf’s past will reappear to challenge him.

It’s not like Buichi Saito is a terrible choice for director for this entry. He was a Nikkatsu regular that understood the value of a film that was entertaining, no matter what genre he was directing (including franchise kick off films like The Rambling Guitarist and Tokyo Mighty Guy). The problem with his focus on entertainment first is that in the realm of Lone Wolf and Cub that is only one of the reasons the films are successful. The other part is the artful use of subtle character interaction and visual/sound design that Misumi had used so well and it is sadly missing for most of this film. It fails to build up many of the more interesting characters, like the female antagonist and the rival disgraced samurai, whom bring to forefront many of the more interesting concepts to the film. This adds to the hard-to-swallow overly complicated plot that tries to weave a few different plot lines together in some odd ways. There are moments when Saito gets it, including a few scenes involving the son Daigoro and his performance, but overall Baby Cart in Peril massively lacks the artistic sense to drive home the heart and characters of this film. 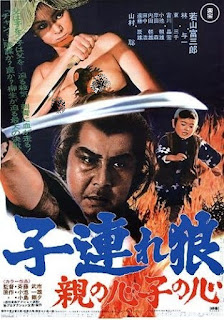 On the other hand, Baby Cart in Peril has no qualms with going for broke on its grindhouse entertainment and for fans of the series that can be a serious selling point. The film goes all out on action sequences, including a finale with a serious body count and the spouts of gore that the series became known for, and goes overboard in some instances by having a major plot point surround a tattoo that the main target has around her breasts and how she uses it as a weapon (I kid you not) and another plot point focusing on a man who can recreate flawless faces with masks to absolve a crime. It helps that most of cast seems intent on digging into their respective roles and even when the script goes into some weird territory they deliver when they can. It’s not like a villain with a fire spewing sword is going to be an easy sell, but it’s impressive that they try and damn right it can be entertaining.

While Lone Wolf and Cub: Baby Cart in Peril might be missing quite a few of the components to elevate it to the status of its three predecessors, the film does have entertainment appeal that works in its favor. It’s silly, in many regards almost too silly even for this series which has featured some outrageous concepts and moments already, but it’s sold with just enough dynamics to make it worth a watch. It will never reach the artistic merits that much of the rest of the series touches on, but fans can enjoy it for what it is – simply for that, being what it is.

Written By Matt Reifschneider
Posted by DarkReif at 2:33 PM