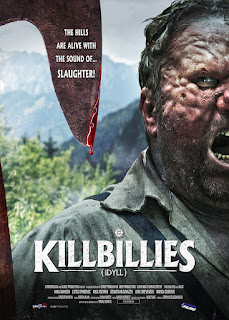 On the back of the box, Killbillies claims that this film is “proving that the American South does not hold a monopoly on sexually depraved, bloodthirsty hillbillies” and this is a key statement to understand just what this film holds. Not just in the content that the film contains, but the approach that it takes. In many ways, if it wasn’t for the language being spoken, Killbillies never really feels like a foreign film in a traditional way – even by modern horror standards. This is a film that whole-heartedly embraces the backwoods killer formula and style as its focus in some very American ways. In this manner, it is disappointing as Killbillies is perhaps the first film I’ve seen that is Slovenian and I felt like it so desperately wanted to be underground American horror that it somewhat loses an identity it might have had. Truthfully, the film is not nearly as bad as the title would have indicated, but it’s also a film that firmly rests as a Wrong Turn film with the attempted execution of the visual and tonal style of Alexander Aja’s The Hills Have Eyes. Not terrible, but not great either.

Zina (Ivanisin) is in a transitional period of her life. She’s outgrowing her life style of uncommitted boyfriends, immature friends, and the cut throat industry of being a model. She takes one last gig for a friend for a shoot in the outskirts of a mountain area. However, once they get there, she will find that the terrible people in her life are nothing compared to the moonshine making and deformed hillbillies that have decided their little group cannot leave.

The original title for Killbillies, before being changed for the sake of sales I’m sure, is Idyll. Not that many people know what it means, but it’s a noun for an extraordinarily happy place and one that’s usually an illusion of some kind. This title is a much superior one and it parallels many of the superior elements that arise in this film. Not only is it reminiscent of the kind of beauty of the mountainous setting of the film that hides the horrific and disfigured killer hillbillies, but it also parallels the running theme that our heroine is moving from one situation that looks better than it is, to a whole different one when the actual shit goes down from the villainous moonshine makers. This is, of course, solidified in the final act by a great final 15 minutes to the final that just hits the entire theme home. If anything, it’s this running thread that lifts the film above and beyond its mediocre plotting and gives it that extra push.

However, the theme easily eclipses many of the actual executions of the film itself. Killbillies looks beautiful, it has strong production values and it replicates the modern style and sharp look of Alexander Aja in many ways, but it lacks that sense of balance to make the horror elements actually work. The film attempts to be vague with its proceedings, showing the audience only smaller bits of a larger story and I’m guessing this is meant to also save on production cost, but it ends up undermining a lot of the character and plot work that could have embraced the themes further. The villains are faceless monsters with the most simplistic of motivations, there is not nearly enough time spent with some of the secondary characters so it’s not surprising when one of them kicks the bucket, and a lot of the tension can be misplaced. When our heroine, perhaps the only character worth really caring about, is on the run at the end of the second act, it drags out to fill time and the tension is lost in a rather repetitive game of cat and mouse. The execution of the horror elements just tends to run dry very quickly here due to a limited run time and lack of build in the horror set pieces.

Ultimately, Killbillies is the kind of film that was decent enough, thanks to a strong threaded theme, lead performance, and production values. Its short run time can be a blessing and curse as it doesn’t spend a lot of time dwelling on things too much, but it also never takes the time to build up the necessary components to really sell its overarching concepts and it undermines a lot of the key ingredients to a great horror movie. For fans of the hillbilly horror genre, Killbillies does an impressive enough job to be better than much of what it has to offer (I’m looking at a majority of the Wrong Turn sequels sitting on my shelf right now), but there was even more potential to the film than it could embrace which is something of a big letdown. Go into the film with a grain of salt, enjoy what it has to offer in terms of modern horror, and take it for what it is.