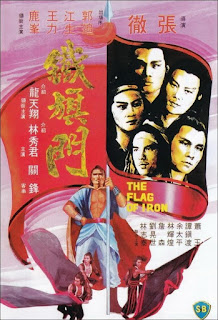 Remakes might dominate many of the discussions for cinephiles in many social circles, but it’s not like they are a new concept by any means. For as long as film has been made, remakes, reboots, and reloads have been an option for film makers and studios to employ. However, it wasn’t necessarily as common during certain eras. The Shaw Brothers era of Hong Kong cinema was one of them where remakes were rare. They did exist though and The Flag of Iron is one of them. The Flag of Iron is a remake of the widely praised Ti Lung and David Chiang film The Duel, but this time around it’s not the more dramatic and political aspects that take the center stage. No, this is a Venom mob film and that means even more gimmicks and cheese. Fortunately, the film keeps a lot of the key plot elements that made the story effective and it’s certainly entertaining, but it’s hard not to see the glaring flaws and lack of dramatic heft in this version.

The tensions between the Eagle Clan and the Iron Flag Clan have been rising steadily over time, but when Iron Leopard (Phillip Kwok) and Iron Monkey (Chiang Sheng) see that their illegal activities have become more than what they ignore they implore their elder brother (Lu Feng) and their teacher to take action. Their dinner goes awry when a fight breaks out and leaves the leader of the Iron Flag Clan dead from mysterious circumstances. It’s up to Leopard and Monkey to uncover who is behind his and stop the conspiracy before it leaves the Iron Flag Clan in shambles.

Even though both The Duel and The Flag of Iron are directed by iconic Shaw Brothers director Chang Cheh, the tone between the two couldn’t be any more different. The Shaw Brothers studio was known for their very particular style, but within that style was unique sub-styles and the two versions of this same story use very different approaches to the focus. In the case of this film, it’s an over the top, slightly tongue in cheek style that the Venom films were known for using. While it does pull away from the more dramatic tones within the script about paranoia and distrust, it does make for a righteously entertaining film and one that Shaw fans will still enjoy. Much of this entertainment value is linked back to the cast themselves and not the script. Phillip Kwok earns the hearts of viewers as the lead, Leopard, who is the one that goes through the largest – and only – character arc in the film. He is surrounded by charismatic characters and actors, both to help and work against him, and this is one of the reasons why this film can entertain in its approach. Even when the film is at its silliest, for example Chiang Sheng reminds him of a poem about various assassins just at the right time when every single one of those assassins shows up to give him grief at a restaurant (convenient, eh?), it works because the cast runs with it. It helps that both Kwok and Sheng worked on the fight choreography, so the acrobatic and versatile fight sequences stand out in the film too which helps to keep the pace brisk as the film moves on.

Unfortunately, the lack of dramatic build for the narrative ultimately hurts the film in the end. One of the big issues that arises is the lack of chemistry between our main hero and his cohorts. The script is meant to continually build a sense of suspense and distrust, but the film doesn’t necessary spend long enough with many of the characters to build this up. The role of The Rambler is horrifically misused to create that sense of impending dread. Instead of seemingly like he might be scheming or using his own agenda throughout, he looks like he’s bored and his report with the main hero lacks the tension needed to sell the twists and turns of its plot. This happens time and time again and where The Duel got it right, this film just uses the dramatic pieces of its writing and characters to move to the next fight.

It's not that The Flag of Iron is a bad film, but it’s hard not to compare it to the massively superior The Duel in how that film accomplished its storytelling. The Flag of Iron is fun, the fights are robust and diverse utilizing the talents of its cast in that manner, but the story with its many characters, twists, and reveals ends up falling flat as the focus aims to entertain more than anything else. The Venom mob will certainly attract many Shaw Brothers fans, rightfully so if one enjoys their brand of wink-wink, ass kicking spectacle, but this is a weaker film even for them as it fails to use all its potential. Perhaps I should have seen this first before The Duel and I would have liked it more, but as is, The Flag of Iron does come off as a tad disappointing. Maybe on repeated viewings it will grow on me. Hopefully.