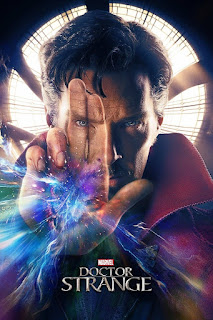 There were a lot of mixed feelings I had when Doctor Strange finished. The Marvel Cinematic Universe is already a series of films that has given me some mixed feelings as a cinephile lately because there is most certainly a formula that they use and it’s made to appeal to the great common denominator of cinema goers. Yes, finally, the MCU is starting to experiment within the reach of the formula and it has garnered some fun films. Guardians of the Galaxy utilized the quirk and charm of director/writer James Gunn to sell its space opera. Ant-Man attempted the Marvel heist flick to mild success. So really, when Disney and the Marvel movie machine decided to attack the realm of mysticism with Doctor Strange, perhaps I got my hopes up a bit too high that they would try to jump the proven track. Instead of a truly unique cinematic Marvel experience, Doctor Strange is the usual MCU fair that garners the same successes and failures of many of the previous films and it generally adheres to the formula pretty strictly – which is kind of sad considering the potential. The film does have a lot of great trippy, psychedelic visuals to go with it and it has that great Marvel sense of fun to go with it, but it’s hard to not be at least slightly disappointed that the film didn’t go further with its concepts. Then again, the film has a 90+% on Rotten Tomatoes and an A Cinemascore, so the people have already generally spoken for the film.

Doctor Stephen Strange (Cumberbatch) is one of the world’s greatest neurosurgeons and he lives the life as such. He’s egotistical, rich, and really smarmy about the whole thing. That is, until a tragic car accident leaves his hands destroyed. In an attempt to regain his stature, he looks for any way to heal his hands and turns to a whispered group of Eastern medicine practitioners in Nepal to find a way. Once there, the Ancient One (Swinton) opens his third eye to a world of worlds where he discovers a new purpose…and a threat looming over the world that his ability to be flexible might be the only one to stop.

So let us talk about the great aspects of Doctor Strange first. As part of the MCU, Strange has that sense of fun that has made this series so popular to begin with and the power house pieces of creative talent behind the film make for a truly larger than life cinematic experience. The casting is spot on, including Nu Sherlock himself as the titular hero who fits in like a glove, and the film is littered with some great secondary characters to populate the world. If there is anything that Marvel has truly been consistently effective at, it’s casting. This lends itself to create the world around them that works, including the trippy as fuck visuals that litter the landscape of the plot. If you think you saw all of the cool Inception inspired physics bending, CGI high brow shots in the trailers…you are wrong. The film is positively littered with fantastic visuals and a sense of fun with those including great use of blacks and neon colors. Director Scott Derrickson has always been a director with a unique understanding of space and blending the real with fantastical (see his horror films Hellraiser: Inferno and Sinister for prime examples of this) that works splendidly with the knack of timing for the humor and heart that the film has to offer. Doctor Strange is very much an origin story, but it does it with enough charm and dynamic that it really embraces its blockbuster status and fits perfectly into the tone and feel that the MCU has established to this point.

With those points, I was highly entertained by what Doctor Strange had to offer. Like most of the MCU, it’s fun as hell and it was a great popcorn flick. That’s the formula though and with that formula there are things that did not work for me. Throughout the entire film, with its core ideas based in mystic concepts of reality connections, realms, and fantastic visuals, Doctor Strange still feels very, very safe. Sure, there is a looming world ending event on hand, but there is never a sense of tension or consequence to most any of the thrills that the film has to offer. It’s almost as if Marvel knew they were going to have to push the limits visually, so they wouldn’t allow the film to push limits in its writing, themes, or characters. The most effective emotional bits all happen in the first third, which comes off as one of the most expensive and effective “don’t text and drive” public service announcements ever made, and after that the drama falls flat. Strange goes through the training sequences with wit, but never the actual struggle. A scene where he is left to freeze on Everest has no effective pulse to show his growth as a character in a prime example. Rachel McAdams' romantic side character is supposed to show his growth, but she's not much more than a plot progression for him as a real character. While Strange as a character has a decent enough arc in the end, like many of the previous MCU entries as of late, the film is also plagued by the lack of a villain which undermines the sense of danger it should have had. Mads Mikkelsen is a phenomenal casting choice for the villain, but he’s given nothing to actually deepen his character or his motivations. He’s as bland as damn near all of the villains in the MCU thus far and it does not help the matters of the film feeling safe. At times, the film even replicates some of the issues of Green Lantern (the ultimate villain, in this case) and when you have to compare anything to Green Lantern you know things are not perfect.

So yes, in the end, I will admit that I had a lot of fun with Doctor Strange. It works as an MCU entry, blending fun characters with phenomenal visuals and a sense of entertainment that will certainly appeal to the largest common denominator of cinema fan. However, there was a lot of potential for the film to really push the boundaries on the MCU formula with a truly evil villain, the use of mystical themes to enrich the heroic tones of our protagonist, and throw in a few twists to give us a new series of film that truly sets itself apart from the rest. If you want a film that challenges the superhero genre like Doctor Strange should have done, than this is not that film. If you want another fun popcorn flick that will satiate your craving for big scale entertainment until the next MCU film hits, than Doctor Strange is the prescription needed. I liked it, but I wanted more and this is not the film to give me that.