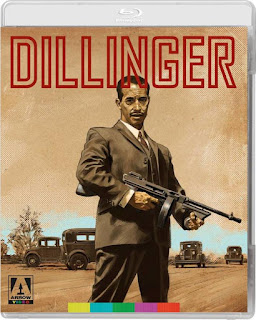 While there have been a handful of occasions where John Dillinger has been the focus of a film, whether it’s a fictionalized tale, documentary, TV movie, or the like, the 1973 film Dillinger from John Milius tends to be regarded as one of the best. This is my first time seeing the film personally and I was very excited going into it as I love the 1930s era gangster films. Tommy guns, fedoras, a general lack of regard for anything, but yourself. This era makes for great dramatic and action packed films. Dillinger does not disappoint in this regard. The film is remarkably artful in many regards, crafting a character from the historical bank robber that’s enigmatic and building a world around him that’s often as superfluous as his own personality is, and yet the film never actually strays from the formulaic main beats of the dramatic action film that the 70s really started to embrace in the wake of Bonnie and Clyde. Dillinger is an entertaining gangster, but it has a heart to it that beats in some unique ways.

John Dillinger (Oates) is a rising star in the bank robbing world. However, he’s a hard man to catch because he keeps his crimes rather clean unlike some of the other iconic gangsters of the time like Baby Face Nelson (Dreyfuss) or Pretty Boy Floyd (Kanaly). FBI man Purvis (Johnson) is determined to bring him down though at any cost.

Watching this film decades since its release leaves for a fascinating impression. John Milius, whom during the 70s was one of the big writers in Hollywood with hits like Jeremiah Johnson, brings a rather unique energy to his debut Dillinger. While he would later refine his directorial chops on Conan the Barbarian, Dillinger represents a director who really wanted to craft a film that’s special and goes above and beyond the normal gangster film formula. Now, this leaves both a great and often perplexing aspect to the film as it tries to cover a lot of ground with its script. Focusing mostly on the latter part of Dillinger’s career, the film has to pick and choose what aspects of his life to focus on and still deliver an exciting cinema experience. This leads Dillinger to do two things. One, it builds a protagonist/antagonist arch between Dillinger and G-man Purvis to keep things exciting and give a face to the conflicts of the film. This leads to some great interactions and a phenomenal series of very violent shoot outs in the third act, although it's hard to say that the character of Purvis is a well developed antagonist that truly rivals the depth of our lead. Two, it has to leap to various highlights of this time period to give the character the depth needed for an audience to relate to a person that was seen as a criminal. These tactics in the narrative and plot leave Dillinger feeling a bit stuttered as it tries to find a flow that never comes easy. The film uses a rather awkward voice over from Purvis to keep things connected and it also uses montages built from newspaper clippings and pictures (usually of the cast in character) to give the audience a rundown of what has happened between scenes. Sometimes this works, like in the opening credits sequence that uses the famous “The Gold Diggers’ Song,” but sometimes it doesn’t work. This approach can also leave the rotating cast of secondary characters out in the cold. Fortunately, in the case of the second issue, Dillinger is packed to the gills with a phenomenal cast and they own their respective scenes and characters with ease – specific instances go to Richard Dreyfuss as Nelson whose arrogance eats up sequences he shows up for in the second half of the film and Kanaly as Floyd who gets a phenomenal send out in the third act. It takes a bit of effort, but there is still a lot of great, robust energy to how ambitious this film is with its structure and approach and even when flawed it’s to be respected.

The key that makes Dillinger work overall is, as one would expect, the character version of the titular person. Warren Oates, who oddly looks very similar to the real Dillenger, absolutely stuns as the character and this film, despite its patchy flaws as mentioned above, really caters to creating an enigmatic and fascinating character for the audience to latch onto. His relationships with those around him creates a dynamic nature to the film that carries a ton of charm and it’s done in both big and small ways. Dillinger is a character that can be irresistibly charming as seen in his jail escape sequence, he can be viciously brutal and arrogant, as is seen when he meets Nelson for the first time, and he can be a be shockingly loving and cold as the film portrays his relationship with his girlfriend Billie, played with impressive ability by Michelle Phillips. Milius drives home this character as a sort of larger than life personality powered by the layered performance of Oates and it’s easily the best aspect of the film as a whole. This performance and the writing for the character makes this film worth watching for all kinds of film fans.

All in all, Dillinger can be a mixed effort as the performances and ambitious approach to its narrative make for a film that inspires. It’s also a film that comes off as a bit rough on the edges and too ambitious to move and flow like it desperately wants to. For cinephiles, Dillinger still gets a huge recommendation from me as an insightful and often daring picture that pushes its boundaries…even if it pushes too hard at times. This latest Arrow Video release of the film is the way to see it too with a plethora of great behind the scenes interviews and awesome commentary, not to mention its brand new high definition restoration.