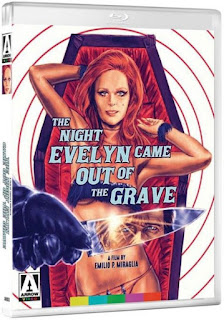 PART OF THE KILLER DAMES BOX SET FROM ARROW VIDEO

In an effort to set up a context for this review, I’ll admit – I made a mistake. Instead of watching the two films in the Killer Dames double feature box set in chronological order, I started with The Red Queen Kills Seven Times mostly due to its kickass title. I had little knowledge of either film prior to watching them, perhaps knowing that they were cult favorites for some of my giallo loving cohorts, and I was pleasantly surprised with the The Red Queen’s blend of gothic elements and giallo structures. Going into the previous film The Night Evelyn Came Out of the Grave (which will be referred to as Evelyn from this point on) of similar style from director Miraglia, I had high hopes for another round of gothic giallo fun. However, The Red Queen was most definitely a more refined approach to this style. Evelyn is certainly a ballsy film at times, willing to sacrifice logic or narrative flow for the sake of a few shocks and revelations, but it sacrifices too much and it ends up feeling half cooked despite some strong visual elements and exciting concepts.

Alan (Steffan) is the Lord of a wealthy estate, but when his wife Evelyn passed away it drove him to the brink of insanity – enough so that he punishes any red headed woman he sees. However, he’s back on track with his life. His castle is newly restored, his family supports him, and he has recently married a wonderful young woman (Malfatti) to move on with his life. It’s too bad that his dead ex-wife seems to have other ideas…and the body count has only started.

There are a lot of solid foundations at play during Evelyn that director Miraglia would refine in his next film. The mystery that presents itself in the second half as the newlywed couple settles into their castle home is intriguing when all of the pieces of the film start to maneuver into position. There are a lot of visually and fascinatingly well shot moments by the director (including a trick funeral procession that randomly ends up being…not a funeral procession to avoid spoilers for a fun scene) and the final act is a robust series of wickedly fast plot twists that are certain to leave the viewer’s head spinning. As a murder mystery, it hits all the necessary components in this manner. Questionable morals in a secondary cast, a twisting plot, and plenty of gray area for the universe to settle into. Evelyn is even full of a lot of very interesting set pieces that inject the gothic elements into the giallo style structure and narrative. The opening “torture” scenes, a great sequence where the new young wife visits Evelyn’s tomb, and a ghostly séance give the film ample opportunity to inject some great atmospheric gothic elements into the film. Director Miraglia runs with this at times, balancing the chic look of 70s giallo with gothic tones to create a lot of interesting visual dynamics.

This all sounds fine and dandy, but the problem that arises then with Evelyn is that despite so many great giallo elements and gothic set pieces, the film rarely feels cohesive and the narrative flow is a mine field for a viewer’s sense of logic. The film starts off by portraying one of our main protagonists as a serial killer out to torture and kill as many red heads as possible (which is a subplot that is essentially abandoned in the latter two acts), it adds in some off the path subplots concerning family members that are not fully explored, and there is even an off balance sense of timing for everything as it blurs together in spastic bursts of plot or narrative shifts. We are not even introduced to the actual supernatural concept of Evelyn until well into the second half of the film and it seems almost like it’s a bit too late for the idea to be fleshed out in the way it’s intended. Granted, a lot of these can…sort of…be explained by the series of twists presented in the final minutes of the film, but even then it leaves a series of questions and plot holes large enough for a viewer to lose themselves in. Giallo films are always meant to keep an audience off balance, but here it just doesn’t quite work in the film’s favor.

There is some charm and a lot of intriguing ideas at play in The Night Evelyn Came Out of the Grave, but ultimately the film falls short of making it work. As it was mentioned previous, Miraglia balances the gothic pieces and the giallo form in a much more effective manner in The Red Queen Kills Seven Times, but even then that film feels a bit raw on the surface. Evelyn is just a rougher version of a lot of the same ideas, just with a different plot. This latest Blu Ray release from Arrow Video is packed full of fantastic information for those looking for it about these various things, including a wonderful little visual essay from the walking cult film encyclopedia Stephen Thrower and some amazing articles in the booklet that comes in the box set. Even though I felt Evelyn was a patchy film as a whole, Arrow knocks it out of the park with this release so any fans of giallo or Italian cinema are going to want to dig into this limited release immediately. It’s worth it for all of the great features around the film, even if Evelyn falls short.


KILLER DAMES:
THE NIGHT EVELYN CAME OUT OF THE GRAVE:

Written By Matt Reifschneider
Posted by DarkReif at 2:50 PM