One of my focuses as a writer here at Blood Brothers is to dig through a lot of the newer genre material to find the potential cult films from the year. This is actually quite the task and it takes me to some interesting corners of the cult cinema realm. As part of The Blood Splatter series, I will attempt to give some time and thoughts to some of the recent genre films that I haven’t been able to cover in full for the site that have been requested for us to cover in some shape or form. This first article will focus on some of the horror films I have recently watched including #Horror, Nina Forever, and Mexico Barbaro. 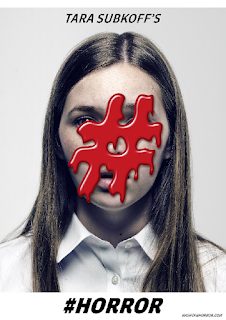 Occasionally you hear of films that are panned at the time of their release, but with time they find an audience that digs into the layers and finds a film that was ahead of its time which garners praise later on in its life cycle. #Horror desperately want to be one of those films. Instead of focusing down on some of the slasher elements that drive the horror aspects of the film in the opening scene and end of the third act, it decides to take a social commentary approach to its story and gun for an overstated artistic angle. What we are given is a film that clings to forced artistic elements in desperation, allowing the narrative to haplessly wander down irritating paths about tween girl angst and technological paranoia while the performances fluctuate from hilariously over the top (Timothy Hutton as the father character of one of the girls eats scenery to unintentional delight) to downright headache inducing (some of the secondary cast of young girls). In perhaps the strangest choice yet, the film actually doesn’t introduce its slasher pieces until the third act which leaves about an hour’s worth of tween girls bitching at one another and sequences of them dancing, eating, and generally boring the audience as it tries to craft something even remotely reminiscent of tension or atmosphere.  #Horror is an arthouse horror film gone horrendously off track that thinks it is brilliant the entire time. It's a move that makes it a chore to sit through while it's being arrogantly ignorant of its own issues the entire time. 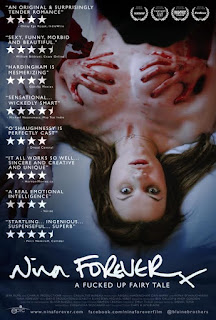 Oddly enough, just last year I watched a film with a very similar concept to Nina Forever called Burying the Ex. In the case of both films, a young couple, with the boyfriend on hand overcoming the sudden death of a previous girlfriend, finds solace in a new romantic relationship only to have the dead (now undead) ex come back to create havoc in their lives. While Burying the Ex was an exercise in generic comedy tropes done with a bit of charm to carry it, Nina Forever takes a more downbeat and artsy approach to the subject matter. Instead of slapstick comedy, it approaches the subject matter with a pitch black comedic dryness that feeds into its symbolic scripted elements. Truly a winning combination in my book. The undead girlfriend is not some sitcom problem to be handled, she’s representative of the baggage that modern young couples bring into relationships that they must overcome. Sure, the results here are still horrifically funny at times (the gore that Nina leaves behind after she appears is a prime example of this), but really Nina Forever is a film that is powered on pure emotional grounding from performances that add a nuanced depth to the dramatic core of the film. This is a horror film that rises above its genre into something much more impactful about the human condition. Unfortunately, it wouldn’t shock me if Nina Forever found itself as one of those beautiful cinematic gems that only a handful of people have seen. However, I highly recommend it for those looking to dive into a thoughtful and emotional film about modern trauma that just so happens to be a dark horror comedy. 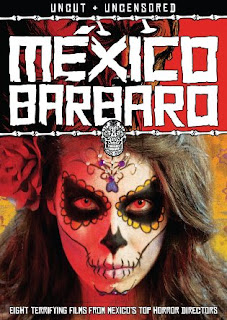 Directors: Isaac Ezban, Laurette Flores Born, Jorge Michel Grau, Ulises Guzman, Edgar Nito, Lex Ortega, Gigi Saul Guerrero, Aaron Soto
With the recent explosion of horror anthology films (and why not, I love short story horror!), Mexico Barbaro seemed to intrigue me more than some of the others due to its culturally centered theme and opportunity to give some underground talent a voice in a widely released film. However, despite some diverse storytelling and some solid pieces, the overall series of short films is a bit underwhelming. The diversity of the various parts do mean that if you don’t like one film for some reason, you won’t have to wait long until the next one starts, but it also means that with its very robust line up (there are eight short films included) that many stories don’t get the time to develop ideas, characters, or plot. Thus, the majority of them end up as gimmick focused and it undermines the film as a whole. Some of the stories are fun and impressively artistic including a film about two bandits on the run who choose to spend the night in a haunted villa, but most are more akin to grindhouse affair with little in the way of depth or foundation. It’s not very often a short film spends its first half building up the idea of a goblin creature rape sequence only to spend the second half executing said sequence, but that’s what you get in Mexico Barbaro. There is a bit of fun to be had in some of the creative gurgling that happens in this anthology film and how far some of the stories will go to be memorable, but overall it’s mostly disappointing with a few shining bright spots to latch onto.