Return of the Sentimental Swordsman (1981) 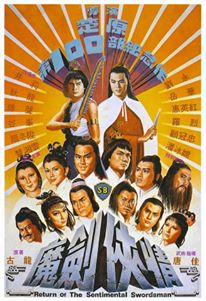 “There’s no truth in the martial arts world. There’s only dead people, gold, and fame.”

After finally scoring the The Sentimental Swordsman trilogy to own, I was stoked to dive into this Chor Yuen directed wuxia series. They were huge box office smashes when they came out, they all feature robust casts, and I’m always a sucker for a franchise I haven’t seen yet. However, the original Sentimental Swordsman was a bit weaker than I was hoping (you can read my review HERE) and its eclectic approach and “too much material weakens the entire thing” writing left the film as a mixed bag. Its follow up, The Return of the Sentimental Swordsman, fixes a lot of the issues that arose in the original and delivers a truly thoughtful, engaging, and emotional Shaw Brothers style wuxia worthy of the franchise tag. Return is exactly what I expected from this series to begin with and it hits home with some great moments.

Little Flying Daggers Li (Ti Lung) has always been a recluse, but in the five years since his return and the eventual duel with the Plum Blossom Bandit, he’s literally disappeared from the martial arts world. His absence has left something of a void in the rankings of martial arts experts and a vicious clan plans on conquering the martial arts world. When a trap is set to bring Li out from hiding, he must set out to find his friend Afei (Derek Yee) to take on the leader of the Money Clan and end his vicious killing spree.

One of the issues that made the original Sentimental Swordsman a bit too dense for its own good was its overly complex plotting. There were a lot of a characters and not enough time to properly explore them all so they ended up being a bit gimmicky. Return of the Sentimental Swordsman, while starting off in this same direction by throwing the idea of a ranked list of martial arts experts at the audience, quickly clears the air by the second act and focuses down on a handful of main protagonists and antagonists – grounded by a phenomenal cast that includes Ti Lung, Alexander Fu Sheng, Ku Feng, and Derek Yee. This film features a much more simplistic narrative, ditching most of the mystery for a more straightforward kung fu story approach, and it allows the characters to breath within the universe that they inhabit. Return certainly still has its gimmicks, various fighters show up with weapons and silly skills – including one of the most awesome/ridiculous plot twists concerning Fu Sheng’s Left Handed Swordsman – but the film incorporates them in a much more naturally flowing way. They don’t stand out as obviously glaring moments of outrageousness, but serve the story and narrative in effective (and shockingly emotional) ways as the film explores the cost of greed, fame, and the trail of devastation the ego leaves in the process of earning a place on the top list.
Once again, the execution of the film is fairly impressive. Chor Yuen adapts the story to the screen in a strong manner, using his strong sense of dramatic tension and visual depth to add to the proceedings of the film. The fights are fun and exciting in the classic wuxia manner of wires and lots of flipping with the sword fighting, although there are a few randomly awkward uses of slow motion that detract in this area that randomly pop up, and the film is powered on the shoulders of a phenomenal cast. Ti Lung and Derek Yee carry the brunt of the film on their shoulders, giving a nice sense of humanity to their characters, and Ku Feng as the lead villain steals a good portion of the third act as he taunts and tries to manipulate the narrative into his favor. In particular, he has a great scene when a “human trafficker” (played with a charming performance by Lo Lieh) brings him the dead body of his son and he proceeds to have a roller coaster of unbalanced emotions. Oddly enough, one of the weaker elements is a somewhat miscast Alexander Fu Sheng whose childish look – why oh why does he continually have those ridiculous bangs in movie after movie is beyond me – and unemotional demeanor for the character doesn’t exhibit the mystery and gray area that is required for the character. He was always known for his charm and likable screen presence, so casting him in a rather stoic and darker villain role seems ill fitting at times. The rest of the cast, including a slew of great smaller roles, is spot on and it really deepens a much sharper script.

All in all, Return of the Sentimental Swordsman is a much more effective and robust wuxia film than its predecessor. There are a lot of intriguing themes (including a repeated theme death versus the death of one’s reputation) and some great character dynamics that add to the emotional impact of the wuxia story being told. It has a phenomenal cast overall and the style, still in the vein of the original, remains effective. For fans of the Shaw Brothers style wuxia, those of Chor Yuen’s particular style, Return comes with a very strong recommendation. Let’s just hope that this focus on writing and high quality execution carries over into the third film, Perils of the Sentimental Swordsman.