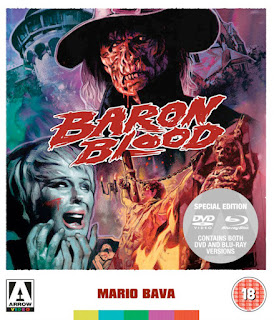 Recently I held a discussion with some friends about the generally over used phrase ‘style over substance’ in cinema and its rather derogatory usage. Granted, I agree that substance always trumps style, but I would also make the argument that sometimes it’s perfectly fine for a film to have lots of style even if the substance part of its appeal is less than fulfilling. An archetypal example of this discussion and my stance on it is Baron Blood, one of director Mario Bava’s pre-slasher horror films that he was toying with in the early 70s. As you will see by the rating at the end of this review, Baron Blood is hardly a great film and the issues with its ‘substance’ certainly drag down a shallow script to what could have been a fascinating plot. However, the film is still very entertaining as it merges the cult and gothic tones of Black Sunday into what would end up being a slasher film form. Sure, its substance is a bit weak and the plotting horribly formulaic for someone 40 years later, but the style is so much fun that it carries a mediocre film into being rather memorable. ­­

When Peter heads to Austria to meet with his uncle, he decides to look a little into his family heritage. Mainly, investigating his blood line which leads back to a horrific ancestor called Baron Blood who tortured and killed people in a castle on the edge of town. Unfortunately, his curiosity unveils that the ol’ Baron was cursed by a witch and the vicious ruler comes back to life to strike terror into the town once again.

As it was mentioned in the opening paragraph, the script for Baron Blood is rather…shallow. The film follows a similar series of events that horror fans will recognize as our young main hero arrives in Austria, starts dating a local girl who happens to be restoring the Baron’s castle of horrors, uncovers the curse, and then has to plan a way to kill the Baron with the help of some friends (and not the police since they believe his theory is crazy). It’s kind of like the classic Mummy formula mixed with a ghost story mixed with a slasher. In a way, Baron Blood is a clash of decades as gothic tones meet the more progressive styles of (at the time) modern Italian. Our titular villain then goes on a killing spree, baffles police, and our heroes have to scheme to put him back in the grave. At best, it’s easy to consume for horror fans, but at worst it’s predictable and cliché. There are a handful of great moments to be had in the film, including the finale which comes out of the blue for a solid twist and the previously mentioned blend of gothic and slasher, but overall the film falters to really craft something ultimately lingering.

The characters within the paint-by-numbers script are just weak overall too and they don’t inspire a lot of connection with their audience. The main protagonist, Peter, is bland as hell and his newly found romantic subplot with Eva is left to die in the middle of a desert, withering away as a skeletal corpse of what might have been an intriguing character element in a film. As characters, both Peter and Eva desperately needed the romantic subplot for some emotional punctuation, but alas it’s a fleeting afterthought. The only halfway decent character is the professor who helps out our young lovebirds and his family. Unfortunately, the interesting ideas presented here (a man of science stomping on his doubts to believe in a curse) is just a passing concept that the film fails to run with as it goes on about its slasher-esque business. Between the plot and these uninspired characters, Baron Blood definitely doesn’t have the foundation for a great film.

To its benefit, Baron Blood does have one big ace up its sleeve: director Mario Bava. Between the use of sets, the visual intrigue, the color schemes, and his impressive ability to add depth through visuals to a script that essentially has none, Bava is the massive saving grace on this film. He shoots each kill sequence like a work of art, embracing the tension, the disgusting and occasionally over the top villain, and shock factors like they are brilliant pieces of artful intrigue. In moments like where the villain hangs a man from a spiral staircase, Baron Blood actually does shine a little bit showcasing its ability to be entertaining in its silliness, but effective when it comes down to it. It helps that the villain is pretty interesting and played with some gusto by Joseph Cotton, but truly the only reason this film has lasted the decades since its release is because of the talents of Bava to create an entertaining film that’s memorable just for that.

So yes, I spent the majority of this review somewhat trashing on Baron Blood for its terrible scripting, hollow characters, and predictable narrative, but thanks to director Bava, a strangely fun villain, and a weird blend of gothic tones and slasher form the film actually does entertain to some extent. It’s hardly one of Bava’s best, in fact it ranks down there with some of his weaker efforts, but the film is still fun and entertaining, both intentionally and unintentionally. Go into the film with that in mind and perhaps you’ll still have fun with it. Outside of that, Baron Blood does tend to sink so it comes with a recommendation only for Bava fans.

*Note: The Blu Ray from Arrow Video contains three (!) versions of this film. I'll add notes at the end of this review if any of the cuts and/or audio versions craft better or worse films as I watch them all.