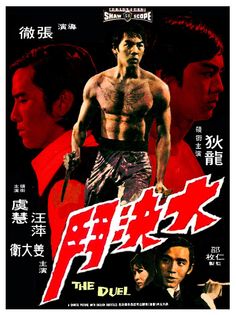 When it comes to Shaw Brothers fans, there is always those silly online debates about ‘who’s the best’ or ‘who’s your favorite Shaw Brothers actor’ that consistently go around. Of course, two of the names that repeated pop up in these discussions are Ti Lung and David Chiang. Let’s be honest, they are not only two of the most effective actors in the Shaw Brothers catalog, but they were popular at the time and the company capitalized on it. This capitalization on their success with audiences lead to The Duel, a film that was, more or less, commercialized on the idea that Lung and Chiang would be playing badass characters that would eventually take their fists to one another. While this sort of gimmicky concept seemed like a movie ticket sales gold mine to the Shaw Brothers, it helps when both actors have iconic director Chang Cheh to help them out. The results of this gimmick riddled idea? A movie that not only surpasses its concept, but leaves a trail of really impressive thematic material worthy of the time to dive into it.

Two clans are on the brink of war. The leader of one clan is set to retire, but before he does he is going to use his best men including the blade wielding Tang Jen Chieh (Ti Lung) and a hired gun known as The Rambler (David Chiang) to end the rivalry once and for all. When the plan backfires and the leader is assassinated, Tang takes the blame and is exiled to a different region. When he returns though, he finds a conspiracy to overthrow both clans as reared its head.

The Duel is a fairly unique kung fu flick for its rather modern gangland style of action and drama. At times it resembles more of a yakuza film (just with the classic Shaw Brothers style) than it does your average Shaolin revenge plot or classic martial arts film filled with training montages and stylized combat. The film takes a grounded approach to its tone, even with some of its gimmicks, and goes for emotional impact with characters and plot twists. The subsequent film works splendidly in a lot of ways blending the dramatic thriller aspects of its gang conspiracy with classic Chang Cheh violence that’s hinged on memorable and effective character builds. If anything, this might be one of the best Chang Cheh films I’ve seen thus far in my time watching and reviewing his discography.


Oddly enough, despite its darker elements and impressively high body count, the film contains a handful of silly aspects to balance it all out. Bringing back the entire Ti Lung and David Chiang slant, only these two guys could pull off the characters they portray in this film. Ti Lung is a love struck bad ass with a damn butterfly tattoo on his chest (which he proudly shows off any chance he gets) and David Chiang plays a wandering knife expert for hire that goes by the name The Rambler who has the legend ‘when he coughs, someone dies’ that follows him around. Even some of the secondary characters are fairly gimmicky like Ku Feng who plays Ti Lung’s drunken older brother and Ti Lung’s character has a best friend who rubs his nose as a character detail. However, the film ably blends these characters into the effective plotting with relative ease and the charming, scene devouring abilities of the cast easily make the film effective in its execution.

While the film still has a few quirks that don’t quite work (too much slow motion in the finale and the musical sting that accompanies The Rambler gets old very quickly), the rest is about as efficiently awesome as one would expect a Chang Cheh/Ti Lung/David Chiang vehicle called The Duel to be. The action is well paced and appropriately vicious, the plotting is fun in its twists and themes, and the on screen charisma of the cast carries it beyond its gimmicky elements. The Duel just might be one of my favorite Shaw Brothers films I’ve seen thus far.

So when it comes to the eye-rolling debates that martial arts movie fans have? The only real answer is that the combination of David Chiang and Ti Lung truly is the best thing any of us could ask for. The Duel is exhibit A when it comes to evidence of this.

Written By Matt Reifschneider
Posted by DarkReif at 8:11 AM