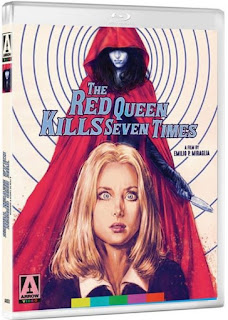 PART OF THE KILLER DAMES BOX SET FROM ARROW VIDEO

Being as this is the first year that I’ve really dug into the giallo genre with more than just a casual curiosity, I am finding myself starting to see the genre’s tones, patterns, and style that has set the sub-genre as a cult favorite for decades. It helps that Arrow Video has been intent on digging up not only the mainstream ones that everyone knows, but ones from the second tier level that are worthy of viewing as new releases for people like me who may not have gotten around to seeing them in previous formats. Their latest Blu Ray box set, Killer Dames, built with a double feature of giallo films from director Emilio Miraglia, sits right within that realm. The first film from the set I am reviewing, the awesomely titled The Red Queen Kills Seven Times (which will from this point just be referred to as The Red Queen) sports a slick mix of Italian gothic elements within the classic giallo structure and narrative approach. The film can be a bit scattered when it comes to drawing out a cohesive mystery to its plotting, but its flaws are made up for by a visual and auditory feast for giallo fans.

Kitty (Bouchet) and her sister Evelyn have always known about the family curse of their heritage within the castle of their bloodline. Sisters, every 100 years, will come to blows and the ‘black queen’ will kill the ‘red queen’ in the process. However, the red queen always returns, according to lore, to kill seven times with the seventh being the black queen. After Evelyn is killed in an accident, a mysterious woman in red has been appearing. When she shows up, somebody dies within Kitty’s circle of friends. Is this Evelyn back from the grave to fulfill their legacy or is this just someone else with a more vicious agenda?

Right off of the bat, The Red Queen tries very hard to keep its audience on their toes (and perhaps on their heels) with its robust and often topsy-turvy script and narrative. It starts off with a rather intensive back story that explains the lore of the family curse and introduces us to the two sisters that the film will focus on – albeit in child form for the time being – and this is probably the most straightforward moment that the entire film has to offer. It quickly shifts tone from this gothic inspired opening to a more giallo aspiring affair as we find out that Kitty, the black queen from the opening, and her family must sort out a will since their grandfather died. At this point, we are introduced to the first set of possible victims/killers for the giallo portion of the film as our villainous red queen starts to show up and knock people off in creative ways. There is also a second set of possible victims/killers introduced at Kitty’s work, which happens to be a fashion house (what giallo isn’t fashion forward?) and let’s not forget that we also have to cover Kitty’s sister Evelyn’s death in flashbacks to help set up the mythos of the film. It’s this first act that can be perhaps the roughest portion to navigate as there are dozens of characters and relationships thrown at the viewer. It muddles the narrative quite a bit as larger characters and their roles remain hazy in the grander scheme of the film, including a third sister that sort of appears out of nowhere, and the film knots up a lot of seemingly unrelated subplots that show up. Many of the subplots may not feel finished, including a strange man claiming to be Evelyn’s boyfriend that results in one of the most haphazardly executed sexual assaults that I’ve seen in a giallo (and one that doesn’t resonate well with the themes and style of the rest of the film). At times this sort of maze of plotting and characters seems intentional by director Miraglia to keep the audience disjointed from finding a flow to the film, but it’s also somewhat abrasive for viewers. Perhaps with more viewings I’ll find the style and approach a bit more effective, but for this review I have to admit that I was a bit disconnected by it until things begin to move more cohesively in the second and third acts.

Whatever issues the narrative and plot present the audience with its intense layering and seemingly endless red herrings towards the identity of the red queen killer, The Red Queen does make up for it in some slick visual and auditory elements. Miraglia, despite such a limited filmography, is very much a strong director in his visual style as he blends supernatural gothic elements into the modern (read: 70s) style of the giallo. A dream sequence stands out as uniquely unnerving and a few of the kills are effectively tense and occasionally brutal. A death by fence climbing in particular stands out as something truly shocking that sticks out. Hell, even the final set piece which features a trap room that fills with water is impeccably shot for maximum tension and remains a sequence that I have yet to see in another giallo. This is partnered with a very light and fluid score that is perfectly giallo with a memorable main theme that rings out long after the credits have rolled. The execution of the performances is effective too, although the writing occasionally hinders some of the main roles from getting a lot of dynamics. Poor Bouchet is somewhat cornered as the victim of the film even as the main protagonist, but she does it with admirable conviction with her bright ‘deer in the headlight’ eyes that convey the emotional terror, confusion, and shock needed to keep the audience hooked.

All in all, The Red Queen Kills Seven Times is a pretty memorable and effective gothic giallo worthy of such a robust release. Some behind the scenes material and a visual essay on this release really add some nice touches to the film for fans (or newbies like myself) that explore some of the oddities of the film and its often overly dense plot and narrative. It’s not a perfect film, due to the issues mentioned above, but it’s hard to ignore how entertaining and memorable it is with its unique gothic elements and high speed approach to its mystery. The film comes highly recommended.

Written By Matt Reifschneider
Posted by DarkReif at 9:43 AM