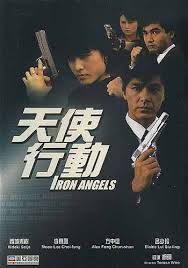 At this point in my life as a cinephile, I watch a lot of foreign films. I always have, generally speaking, but now it seems I do so with an almost fever pitch as cult cinema from around the world unfolds before me and I continually discover new films. Unfortunately, it’s hard to find a lot of foreign films that peak my interest at times and, in particular, the action films from Hong Kong in the 80s and 90s can be particularly troubling to find. Sometimes you just have to take what you are given like watching something online since you can’t seem to find it to purchase anymore. In this case, it’s the Hong Kong action spy film Iron Angels – also known as Fighting Madam, also known as Angel, also known as Midnight Angel. It’s known by a lot of titles, really, and the one that I found had the title Angel on its credits despite being labeled as Iron Angels which I’m sure complicates matters for newer releases. That’s beside the point, however, when we have a slick little cult gem of an action film like this one. The story is silly and it has the character depth of a child’s swimming pool, but the action…my, oh my, the action is sweet. For those looking for some 80s style Hong Kong entertainment, you could do a lot worse than Iron Angels which features enough intense action sequences to curb any action craving. You can certainly do better too, but that doesn't stop this one from being entertaining on its own grounds.


The mafia in Hong Kong is getting out of hand. After the international police cut off their drug supply that they sell, a rogue leader in the mafia (Yukari Ôshima) takes it upon herself to extract vengeance on those responsible for the hiccup in cash flow while at the same time planning to earn the money back with a mysterious operation. The police are at their wit’s end so they decide to hire the help from the Angel agency, a sort of private police force/espionage group to help take out the rogue leader. The Angel leader John (David Chiang) then assembles three of his best agents to take on the job.

Iron Angels plays out as a sort of 80s Hong Kong version of Mission: Impossible, but instead of big time vehicle stunts they replace it with big time hand to hand combat stunts. The film is hardly a great one and as I mentioned the script is pretty weak overall. The plot is predictable at times with its twists and turns, we never really question the heroics of the Angel team, and it does nothing to really paint the characters of the film without using the broadest paint brush possible. Like many films of the era, it blends some comedy into the action with smaller bits that don’t always work (like how one of the Angel agents has the hots for the guy that is hiring them), but it keeps the film light-hearted enough to balance out the more intense fight sequences. The film is certainly charming, riding on the screen presence of its more than able cast which features a fun smaller role for David Chiang and a scene devouring villain role for Yukari Ôshima. Iron Angels is some very basic 80s action cheese with its surface level material, so don’t expect much more than a popcorn flick out of this one.

The light-hearted attitude does go pretty dark in some of the action sequences. Iron Angels features some very intense fight pieces and gun battles that show off some shocking violence and darker themes. Yukari Ôshima’s villain loves to torture people, as all 80s action villains do, and the film doesn’t shy away from racking up the body count to keep things exciting. The action pieces are more like smaller bursts of super intense action instead of the longer drawn out material of some Hong Kong films of the era and it uses a diverse pallet of style to keep things moving. It has spy stunts where our team has to climb the outside of a building to sneak into a room, it has car stunts, massive gun battles, and enough well-choreographed hand to hand combat to satisfy any Hong Kong fanatic. Sometimes the fighting seems pretty forced into the script by having the villain love to beat people up and test her skills or a meeting between a mafia leader (played by the iconic Hwang Jang Lee) and Angel agent Alex in a car garage where they only exchange words after they start throwing each other into vehicles, but it works to keep things exciting and moving. The true highlight of the film is watching the finale throw down between Yukari Ôshima and Moon Lee (two very capable Hong Kong actresses who know how to fight) that gets downright brutal at times. If anything, this movie is worth watching for the last 10 minutes of martial arts combat as these ladies take it to a vicious level.

If you are more of a casual action fan, then it’s hard to recommend Iron Angels due to its thin writing and often gimmicky characters. If you are an 80s action aficionado or love the style of Hong Kong cinema from this era (like I do) then I highly recommend seeing Iron Angels. It’s a fantastically fun cult cinema gem worthy of a late night viewing that keeps the smile pinned on your face with its lightning pace and intense action set pieces. Here’s to hoping that Iron Angels gets a nice release someday for those of us that love these kinds of movies. This is a film dying to find its cult audience.

Written By Matt Reifschneider
Posted by DarkReif at 8:56 AM