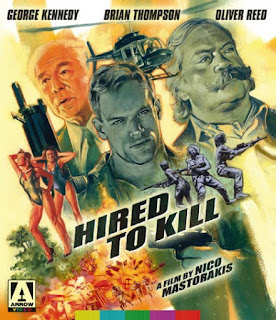 As the credits rolled on Hired to Kill, I had an understanding of why Arrow Video might want to do a slick new Blu Ray release of this film. It’s bad. It’s really bad. Notoriously speaking, bad films have a fairly robust cult following and partnering that with such an odd ball cast and cult director Nico Mastorakis, it only makes this film ripe for cult film picking. However, even as a vulgar cinema auteur myself, it was hard for me to ignore just how bad it was and accept it for its entertainment value as a bad film. Particularly because Hired to Kill fails at having the two things needed to be a truly iconic B-movie: charm and style. The release itself is pristine, Arrow Video went balls out in its restoration and the behind the scenes material is remarkably fun, but the film itself is going to be horrendously hit or miss for action fans. Hired to Kill is the epitome of a love it or hate it kind of B-movie.

Ryan (Thompson) is one of the best mercenaries around, but he’s a bit hard to work with. When Thomas (Kennedy) needs someone to put together an all-female team of soldiers to infiltrate an island, free a revolutionary (Ferrer), and take down a dictator (Reed), he’s the only man for the job. However, this job may not be as straight forward as Ryan thinks.

At its basic levels, Hired to Kill is about as exploitative as action films get in concept. It’s a gimmick, that being a sort of weird hybrid of Wild Geese and a female spin on the Magnificent Seven, done with the budget of a straight to home video affair and lathered with enough silly, eye rolling execution to keep the unintentional laughter flowing and the cringes happening when it tries to be serious. Mastorakis remains something of the Greek king of exploitation and while he’s only credited as a co-director on this film, his vague directorial fingerprint is felt throughout it in some of its patchy approaches to its subject matter. By the time 1990 rolled around, the action genre was certainly speeding towards becoming a parody of itself as spectacle became a focus and Hired to Kill showcases the focus on entertainment over substance. Very little of the film feels fresh, as I mentioned it feels like the low budget bastard child of Wild Geese and Magnificent Seven, and the film seems geared to try and get the audience cheering than delivering a thoughtful or even sensible film. Scenes of random “action clichés” like martial arts training, a helicopter fight, and even one of the most awkwardly executed sex scenes I’ve ever seen in an action film, litter Hired to Kill. In this sense, if you are an audience member looking for a very silly and illogical action flick then Hired to Kill will suffice to curb that craving with its outrageous characters, half assed action set pieces, and forced plot progressions.

Vulgar auteur cinema does thrive on making the B-grade elements of films like Hired to Kill into some sort of art form and while I can foresee many fans digging into the “art” of this one, it was hard for me to find it more than abrasive in its attempts at humor and charm. In many ways, this film utterly drops the ball when it comes to what might have been some intriguing aspects to its core story and approach. An all-female mercenary squad led by a sexist male character? Definitely potential to showcase a sort of feminist approach to the cheesy action films of the era, but instead Hired to Kill decides to give the female characters weak backstories, no character arcs, and only decides to put them on display as their model cover instead of their badass warrior modes. How about an intriguing plot line where our main protagonist must decide whether or not the money or the moral choice is the right one? Well, Thompson delivers a character with as much charm as a dirt clod and a stiffness that gives his jawline a run for its money only making that decision seem like a forced plot progression. This happens again and again as the film repeatedly takes intriguing concepts, ineptly tries to execute them, and stumbles in delivering an action film that has no real depth or even memorable characters – even for a B-movie.

If there is anything really worthy about Hired to Kill, it’s that the film is good for a handful of unintentional laughs. The interviews with director Mastorakis and Thompson on the special features show case a film of two sides, a serious one about creating a film that would hold up and make a bit of cash and one that was silly and played up its ridiculousness. Both can be entertaining on their own merits, but the problem with the film itself is that it has trouble at blending the two sides into something worthy of the robust release it’s getting from Arrow Video. Hired to Kill will have its fan base. With the cast and the cult director, that much is almost a guarantee and there is certainly a fan base out there for a film like this one and if you like films so bad they’re entertaining, you should probably  give this a go.  However, for this reviewer Hired to Kill was just another B-grade attempt at cashing in on the action film craze of the time period and not much more than that.

Written By Matt Reifschneider
Posted by DarkReif at 11:07 PM