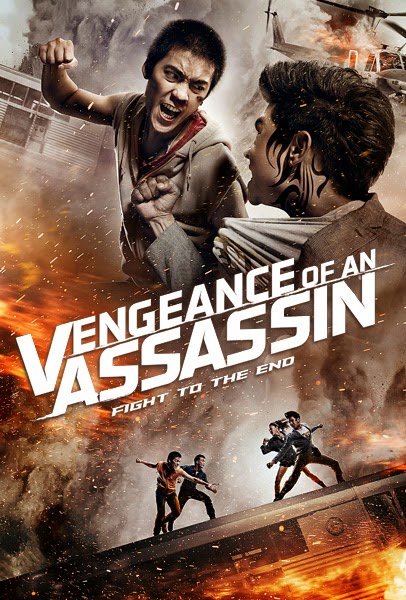 The Thai action scene, which exploded in the late 90s and early 00s with the likes of Born to Fight and Ong Bak, owes a great deal of its success to Panna Rittikrai – a director and fight choreographer with a true knack for fun and brutal action. So that fact, combined with the news of his passing last year, has left some intriguing expectations for his final directorial effort Vengeance of an Assassin - expectations that probably won’t be met by harsher critics and expectations that will leave this film revered by others simply as the last of an era. In a way, the film is both more of what the audience wants and something unique as it perfectly culminates what Rittikrai was all about. It showcases some interesting new ground for the Thai scene and leaves us wondering what he might have done next if he had remained with us.

For Than (Nathawut Boonrubsub) and Thee (Dan Chupong), the murder of their parents has hung over their lives like a dark cloud since they were children. Raised by their mechanic uncle (Ping Lumpraploeng), they have always looked for answers but rarely found any. When  Thee leaves and becomes a hitman for hire, he uncovers a plan to set him up as the fall man for a young woman (Nisachon Tuamsungnoen)…by the same people that killed his parents.

At its core, Vengeance of an Assassin is ‘classic’ Thai action through and through. I say ‘classic’ in quotations because this means it comes with both the benefits and the problems of most Thai films. Like most of Rittikrai’s other films, Vengeance sports a ridiculous amount of action and very little in the way of cohesive storytelling. Vengeance starts off building this solid ‘family’ dynamic, but quickly it finds itself sort of just yabbering at the screen. I’m not sure if yabbering is a word, but it certainly fits here. The acting is spastic and the character arcs are forced and awkward – a combination that can be pretty gnarly to get through. There is enough here to get the audience through, but it’s pretty rough sailing – particularly when they add in a random romantic subplot and a botched assassination that really has no legs to stand on. The kicker of this laki of narrative is…well, if you’ve seen any of his other films (or most any Thai film crafted under his influence) then you know exactly what to expect, so it’s not all that disappointing. It’s simply par for the course.

Interestingly enough, Vengeance of an Assassin actually represents something of new ground for director Rittikrai on top of its ‘classic’ Thai action formula. There is definitely a new ‘gun fu’ Hong Kong inspired spin to the story. The John Woo style of bullet ballets and duel wielding guns mixes remarkably well with the Thai action formula here and the culmination of fist n’ feet with guns n’ explosions certainly showcases an interesting direction for the film to take. Rittikrai throws in a couple of ‘uncut’ camera shots of gun fights (think of the hospital scene in Hard Boiled done on a third of the budget) which come out as impressive for film overall. Outside of a fun, but incredibly awkward sequence with one of the most unintentionally hilarious CGI train rides – and crashes – in film history, the action here is awesome through and through. The fights are brutal and well structured, the stunts are top notch, and the gunplay is remarkably energetic.

In the end though, the poorly structured narrative and awkward characters cannot be completely erased by the extensive and energetic action on display. It works at times, including a rather silly but enigmatically appealing opening soccer match in a garage that features more face kicks then Hollywood garnered all of last year, but it doesn’t sell the entire film. Action fans, however, will want to immediately purchase this film as Rittikrai never ceases to pull away from the brutal muay thai fighting and stunt work that made his career legendary and even adds a bit of John Woo gun fu into the mix for shits and giggles. This combination in itself sets Vengeance of an Assassin on a whole new level for Thai action – a statement that should have action fans drooling.