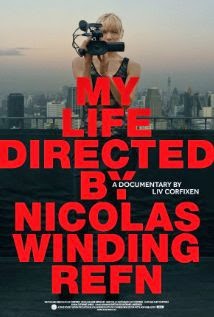 I think this a nice short film, directed by Liv Corfixen, whom is the lovely bride to Mr. Refn. Now, I will warn that I am a big fan of Refn, and I am only shy Pusher 2 and 3 of seeing all of his films, and genuinely enjoying all of them. I don't feel that I am biased though. I think his weakest film is Bleeder [out of all of them], though I think I prefer it to Fear X. Even then, there was a lot about Fear X I liked. That is for another conversation though, and I've already wasted several lines, including this one, not speaking of the title in which I am here to talk about.

My Life Directed by Nicolas Winding Refn, is a nice, and short and sweet look into Refn's life whilst making a movie, though most of the film is the more intricate little conversations during the offshoot hours, after, or before. I like Refn as a personality, honestly. A lot of directors have this sort of mystic vibe about them, as in you don't see a whole lot of candid moments with them. My favorite filmmaker is Park Chan-wook, but rarely do I see the more everyday life side of him, and honestly I know there are a lot of people that don't care about that side or aspect of their favorite filmmakers or artists in general. I am on the flip-side of that coin of course, and I really dig seeing these little moments or fragments into the lives of these people who I truly admire.

That being said, this is my biggest complaint of the film. I don't feel that there are enough really shining moments [good or bad] that stand out. I also can't say how much footage she had to sift through to get what she got, or if there was even that much to truly feel a need to put into the film. Maybe a lot of the footage she captured just wasn't interesting. There are plenty of moments where Refn does not want to articulate or act on how he is feeling or open up for the cameras. In a way, he feels a little guarded that there is a camera on him this entire process.

I've also heard people say they wish this would've just been an extra feature on the home media release of Only God Forgives, and while I get that, I also understand that this was Liv's project. She wasn't obliged by a company or contractor to come in with a tiny crew and make a "behind the scenes" doc to be included as an extra feature. This was her, with her own camera, doing a project for herself. For that reason, I respect her choosing to release this later. And honestly, it probably wasn't even ready or remotely close to being ready for the release of Only God Forgives. I'm sure, as I mentioned earlier, that she had tons of footage to go through, as I see her possibly having the camera there almost at all times.

I don't think there is a ton to say about this film, other than if you are interested in Refn, or enjoy him as a filmmaker, then of course this is most definitely worth checking out. I think my biggest fault with it is its length. The film is not even a full hour (shy a couple of minutes) and I feel it honestly could've been a bit longer. Of course that's subjective, and you could argue with me. In the end, I truly enjoyed my hour with the Refn family (plus the humorous Gosling moments), and I patiently await to see where Nicolas takes me next.