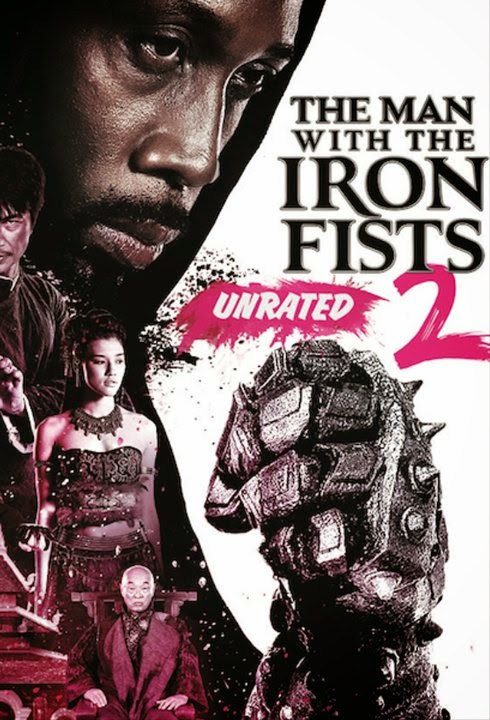 "You see, gentlemen. You just walked into a windstorm of flying elephant shit."

While the first Man with the Iron Fists met generally negative reaction from critics and fans alike, there is a heart to that film which does bubble to the surface. It’s a film crafted by fans of the genre that just had trouble getting their love to translate during the film. There are various reasons why the first film crumbles under scrutiny (feel free to check out my review of the film HERE) and the surprise second film, cleverly titled The Man with the Iron Fists 2, fixes a few of these things…although it tends to falter at some new elements too. The results? It’s another mixed effort that spends more time being entertainingly bad then straight up entertaining.

For Thaddeus (RZA), a move of vengeance by the Lion Clan leaves him severely wounded and floating down a river. He washes up in a small village being run by the vicious and corrupt Beetle Clan. The village is being worked to death in a silver mine nearby and a local leader (Nguyen) is trying his best to stand up to them. Together they will find that it’s not only the silver mine and corruption that is driving the village towards evil…

The Man with the Iron Fists 2 contains the same heart that the first film featured. Wu Tang mastermind and martial arts aficionado RZA once again serves as a writer for the film and as the main star Thaddeus, which is both a blessing and a curse once again. While he still struggles as an actor, this sequel rightly limits his character arc to match his strengths (the strong silent type suits him much better than the love struck and torn individual of the first.) His writing still showcases some terrible dialogue and obvious plot progressions that feel down right face palm predictable, but this film learned from the attempted epic feel of the first and simplifies everything down. We do have two protagonists and two plots that meld into one, but it’s not needlessly complex. It’s a move that saves the film from having too many plot holes and just enough to be hilariously silly. When you have dialogue like the above quoted line, it’s much easier to just sit back and enjoy the film from being a B-grade action flick instead of the attempts at being more than that, which undercut the first film.

It’s this sense of ‘fun’ that really seems to work for this franchise. While the dialogue and acting tend to be terrible on the surface, the film works in that B-grade sense. Dustin Nguyen is perhaps the sole star of the film who seems to really be trying with his acting and partnered with his martial arts skills, is the only one that rises above the straight-to-home video feel. Much of the secondary cast is solid enough, Carl Ng as the villain eats up scenery with his ‘so-evil-it’s-funny’ lines (he delivers a monologue about how hard he is to kill by referencing a prostitute that chewed off one of his testicles), and Cary-Hiroyuki Tagawa plays a concerned mayor that may have his own agenda with relative ease. Some of the family dynamics of Nguyen’s character fall flat – not enough time to really develop his wife and daughter relationships honestly, but it works well enough to keep the audience entertained.

Perhaps the strangest position to the film was the lack of strong fight choreography. The significantly reduced budget certainly hurts in having those bigger fights, but the martial arts on display tend to be fairly basic. Director Roel Reine knows better than to edit and zoom as much as the first film did (which ruined a lot of the well set up action set pieces), but The Man with the Iron Fists 2 doesn’t give him as much quality fight work to really showcase. For a martial arts film, this is a pretty big sin that the rest of the film simply can’t overcome. What they have in the film is fun enough (particularly when some of the members bust out the Mantis style kung fu), but it’s not enough to really win over the more critical martial arts fanatics that are going to be buying this film.

Still, if you are a fan of B-grade action the silliness of the plot and dialogue is going to be overly entertaining. It’s not that The Man with the Iron Fists 2 ever even attempts at being more than a modern homage to classic kung fu with plenty of terrible one liners, gimmick riddled plot devices, and outrageous characters, but that is its biggest saving grace. If you are considering a purchase of the film, you already know if you are going to find entertainment in it or not – so just go with the punches and pick it up.