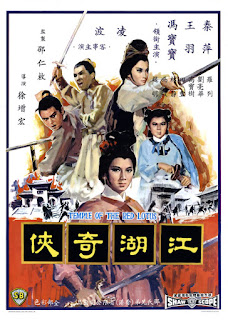 While my love for the Shaw Brothers filmography developed through the studios’ 70s and 80s classic hand to hand combat films, time and availability has grown my appreciation for what the studio had to offer in various genres and styles – but the earlier 60s martial arts films still tend to feel a bit unconfident in many ways. This wavering dedication to a style shows up heavily in Temple of the Red Lotus. Despite some solid attempts at narrative and the sheer star power of both Jimmy Wang Yu and Lo Lieh, the film finds itself wandering a bit too much and failing to provide the entertainment needed to sell it’s epic story.

Wu (Jimmy Wang Yu) has set out on his own. He’s off to find the people that killed his parents and his limited training may not be enough to pull it off. So he heads to the house of some old family friends – where he has been signed off to wed the daughter since he was a kid. Too bad a chance encounter with some bandits and the members of the Red Lotus Temple set him on a collision course with danger.

Like many of the early Shaw films, Temple of the Red Lotus is heavily influenced by the dramatic stage design. There is music where the lyrics of the songs reflect inner turmoil of characters or express to the audience what is occurring to keep the story moving, the plot moves in broad stroke manners, and the structure is very defined. In a way, this allows the film to be fairly easy to consume and understandable for the audience, but it’s rarely as satisfying on film as it might have been. The plot itself is of the wuxia style (wandering swordsman, blah blah blah) and the focus of the film is firmly rooted in a family dynamic with a big heaping side of romantic flavoring. So expect that much going into the film – that there is a lot more crying and pleading then what I was used to in a martial arts film.

The epic story is decent enough and it builds a solid mystery about who’s the real bad guy that kept the pace moving. Outside of its random ending (it’s obvious this was the first part of a series and it’s sudden end without any resolution for any of the main plot points is utterly frustrating), it plays at a solid pace. Unfortunately, the film tends to be very predictable in this manner. While the concept is that our hero, played against his normally quiet and swift badassness by Jimmy Wang Yu, has a huge character arc where he learns to trust his new family and quit being a somewhat frail and frantic man, the rest of the film fails to utilize a lot of the secondary characters. Sure, his wife to be gets some nice character beats in the second half, but everyone else is left to wither away. The villains come and go randomly, her family is filled with characters that get a handful of lines but nothing of huge substance, there’s a random superhero like lady in a bright red outfit, and Lo Lieh is stuck playing out the tough friend/wanna be lover of our heroine who pines for most of the movie only to occasionally pop up to kill a few people here and there. The film either needed to cut some of the characters or bulk up a bit on their screen time. It does neither.

Yet, Temple of the Red Lotus shifts its plot away from the action. This move might be a blessing in disguise as the sword fighting is kind of clunky and lacking the usual Shaw Brothers choreography that audiences associate with the brand. The finale has some fun moments in it as we see Jimmy Wang Yu start to come out of his shell as a character, but getting there is somewhat…well, boring. Even the structure of having the newlyweds battle their way through stages to leave the house is more about them crying and begging to be let go instead of earning their way with their talents as a sword slashing duo. At one point I may have yelled at the screen, "Well gee, if you would quit crying for 30 seconds and kill somebody then you might feel better about yourself." It's not one of my better moments as a film audience.

All in all, Temple of the Red Lotus might have been a decent wuxia film if they had done quite a bit of trimming to the script, actually gave it an ending where it felt like something was finished, and added in more substance to the fights. In it’s current state, the film is predictable, meandering in its sense of urgency, and ultimately boring.

Let’s just say I’m not wholly looking forward to seeing the sequel The Twin Swords. Hopefully, it finishes and improves on what this one has to offer.