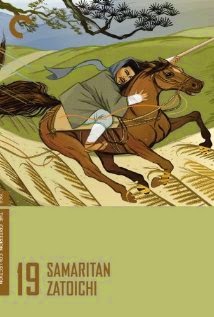 When it comes to watching Zatoichi films, director Kenji Misumi is rarely a man that allows his entry to fall towards the bottom of the franchise. For the nineteenth entry into the long running blind swordsman series Samaritan Zatoichi, Misumi finds himself helming one of the most generic entries into the series. Luckily, he’s at the helm and he gives the film a lot more depth then it has in its script. Otherwise this film easily could have been the worst of the franchise for its misuse of humor, predictable plot, and boring characters.

Zatoichi (Shintaro Katsu) looks to find some money for his endless meandering and ends up doing a local yakuza boss a favor. A young man owes a lot of money and in a drunken stupor ends up at the sharp end of Zatoichi’s cane. His sister, who shows up with the money, is taken to work in the boss’ brothel. This injustice does not go unseen by the blind swordsman and he vows to protect the woman at all costs to right his wrong.

The Zatoichi franchise has more than eagerly established a formula that it, more or less, maintains with fierce regularity. So it’s not all that surprising that Samaritan Zatoichi finds itself heavily entrenched in this same structure. This time around though it feels much less like a comfortable formula and more like an uninspired rut. Not only does the film feel like it’s patched pieces of other stronger films (and other films that are still worse than this like Zatoichi’s Flashing Sword, so there’s that), but the tonality is patchy too. The film starts off on a strong note with a well shot stand off against the young man in his little house that’s thick with atmosphere – but quickly after that, the film loses a lot of that feel for the sake of building a film that’s more fun. The humor, including a rather awkward sequence where Zatoichi is rolled in a rug and is going to be thrown into a river, is almost slapstick in nature and the it’s obvious that Misumi struggles a bit in weaving that into the more serious plot. A potentially tense sequence where Zatoichi must ride a horse to catch some fleeing bandits is played for laughs instead of tension and it sputters out, despite its potential. So it’s not that Samaritan Zatoichi is horrendously all over the place, but it’s inconsistent enough to keep the viewer from truly engaging into the story.

Outside of the fact that we’ve seen this plot routine before a plethora of times at this point, Samaritan Zatoichi still fails to really inspire a lot of dedication from its audience – let alone its fan base. The characters seem redundant and even the continued nuance and build of Katsu as our hero can’t save the film from feeling ‘meh’ with its lackluster characters. The action is standard and the humor (as mentioned) is forced and inconsistent. Misumi still crafts a shot like a pro and there are these bright shining moments of punch – including a scene where the young woman tries to kill Zatoichi in a fit of sad rage, but the rest is simply mediocre at best.

Thus far in the Zatoichi series I have only found myself disappointed in the results a handful of times and Samaritan Zatoichi is one of those. Considering Misumi is the director on this one, it’s easily more disappointing then expected even with its strong moments. Fans might find it decent enough to sit through and if you are unfamiliar with the earlier films in the franchise then it might seem fun and well written, but as a whole it’s just too formulaic with not enough unique aspects to sell itself.