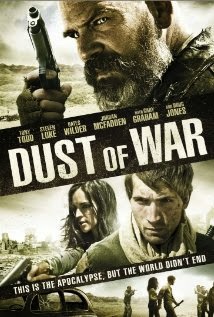 At Blood Brothers, we have always been fond of low budget movies, and in particular, low budget films in the lesser-known genres. Finding out that Dust of War is a post-apocalyptic flick filmed for roughly $200,000 and starring some of our favorite cult actors only piques the interest. And while its low budget certainly hinders the ‘larger than life’ concept of the film, there is thoughtfulness to its science fiction infused plot that rises above what a lot of low budget films set out to accomplish - an art form to the low budget, if you will.

The rumors have been heard. A young woman is supposed to be a harbinger of peace between the invading alien forces and what’s left of humanity in a desolate world. Unfortunately, this young woman (Jordan McFadden) is being held captive by a vicious rogue military unit (lead by a milky eyed Bates Wilder) and it’s up to two men (Steven Luke, Gary Graham) to find her and get her to safety.

While the premise itself is a well treaded one (I just watched Jupiter Ascending and Babylon A.D. that featured the ‘young woman as savior of the world concept’), Dust of War takes a more character focused and subtle approach to the material. Instead of focusing on the aliens versus human approach that many science fiction films would have adopted, this one instead opts for a more subdued and Mad Max inspired focus. Our almost dialogue-less hero Abel is purposefully left as a sort of anti-hero in the film (although anti-hero might be a bit extreme, so let’s just say apathetic) that allows him plenty of room for his character arc – which is subtle, but there in the sort of romantic subplot with our prize harbinger Ellie. There are plenty of long shots and slow panning character beats to emphasize the film’s streaks of art house in the land of grindhouse, which is key to Dust of War and its depth as a visual storyteller. In addition, the film also only features a couple scenes of the aliens to remind us of the ‘why’ without sacrificing the ‘who and where’ of the plot’s motion. It’s a nice touch that adheres to the budget and the sensibility of the film where the aliens are not the focus.

Sometimes the shifting between the two elements (the character driven slow moving plot and the grindhouse post-apocalyptic action) can be a bit hard to take as there are moments when the film seems to be taking itself too seriously and then not seriously enough. The restrained budget certainly forces the film to pull away from some of the ridiculous action that director Andrew Kightlinger obviously wanted in the final act including a fun car chase sequence. It leaves Dust of War feeling a bit too ambitious for its own good. This is rectified somewhat by some of the sheer onscreen charisma of its cast, both Gary Grahm (ROBOT JOX FOR THE WIN!) and Doug Jones (HELL BOY FOR THE DOUBLE DOWN!) simply eat scenery here, and the film’s ambition – while not necessarily the best choice for $200,000 - does contain an energy that many low budget films can lack. So there is that for the vulgar auteurs out there and Dust of War gets an ‘A’ for effort.

This leaves Dust of War as a massively ambitious film with a lot of heart – even if some of the budget constraints hinder the overall execution of the film, i.e. an occasional change of scenery might have done the trick to ramp up the middle portion that drags on…like a cave or something for a shootout. Nonetheless, for $200,000 there is a lot of thoughtful promise to the various individuals involved with the film. The blend of arthouse and grindhouse aspires to something more grand (particularly for director Kightlinger) and the ending that leaves a franchise open always gets me excited – particularly where a series of these films could go with a following and some money.