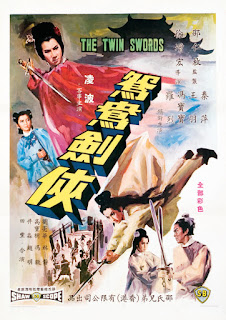 After the rather disappointing first entry Temple of theRed Lotus, I was a bit hesitant to just leap into The Twin Swords. With essentially the same cast and crew from what I can tell, there was potential that it would just be an elongated third act for the rather long winded and boring story focused pieces of Temple. Trick me twice and shame on me. In a strange way, despite still not feeling like a whole film on its own, The Twin Swords is a step up from the first entry. It is action packed, filled with legit consequences, and even adds a few out of the blue elements to keep it interesting. It’s still not a full movie, but at least it’s more entertaining.

If you are planning on watching The Twin Swords first, stop. Go out and purchase a copy of Temple of the Red Lotus first. If you don’t, then you will have no fucking idea what’s happening here. My complaints about the original one having only the first two-thirds of a film are justified here in The Twin Swords as the film starts off by showing the final fight from Temple and then continuing on straight from there. It’s the third act. It ties up a slew of the dangling plot threads, gives a fitting end to plenty of characters, and even throws in a few hints to give ground for the third film to come. To be honest, some fan needs to do a 3-hour new edit of the two films together as it makes more sense.

So outside of actually giving the ending that Temple deliriously needed, The Twin Swords does improve on a lot of things. The action is much more effective, fun, and well shot to start off. There are a lot of gimmicks to the film thanks to a massive ‘library’ filled with ridiculously obvious traps and an almost endless stream of ‘bad monks’ to be slaughtered by our heroic family. The film also expands on the familial characters. This gives time for some interesting, but overlooked, family members that got glorified cameos before and ties together some of their plot lines. In particular, the little young girl gets a lot of great moments – including her own fight sequence and that’s just one of the handful of characters that get a bit more time and depth.

To make room for more time for secondary characters, both of the main star attractions do take some serious screen time edits. Jimmy Wang Yu finds himself locked up or kneeling outside of a door until the final act and Lo Lieh suffers a great plot twist in the first third that had my jaw drop. Not to give too much away, but his character, which was the highlight of the first film, gets some great character beats that make his limited screen time here completely worth it.

If anything, the biggest issue with The Twin Swords is that it never feels like it could stand on its own. Had I not just watched Temple of the Red Lotus, this film would have been a massive disappointment thanks to having no lead up to character explanations or plot build. It simply leaps right into being the third act of an already established film. I would also say that as a martial arts fan I was somewhat disappointed with the final duel that was being built up. The film adds a few fantasy elements to build up a more grandiose aura for the final showdown, but it sort of putters at in the last handful of minutes.

Outside of a few core issues, The Twin Swords is a massive step up from the first entry. The action is a lot of fun, the wuxia story line is wrapped up nicely (while retaining enough bits of story for the upcoming third entry The Sword and the Lute), and there are some fun twists with characters and fantasy elements that keep it entertaining. It’s not perfect, but it’s a step in the right direction. Let’s hope the third film can keep this climb moving.