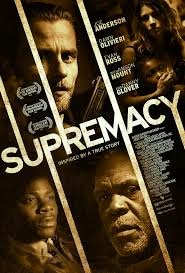 Whenever I see the phrase “inspired by a true story” or “based on true events” or any of the other ways they go about saying the same thing, I automatically get cautious. When those kinds of phrases are used, there is a chance that the film will collapse into a Lifetime original movie and nobody wants that. For Supremacy, that never happens. While the events of a real life occurrence are the basis of this film, rarely does it feel like a biopic or dramatization of something on America’s Most Wanted. Director Deon Taylor and company craft a film that is a film first – which might piss some people off, but for the film it’s the smart choice.

Tully (Joe Anderson) was just released from prison and one of the Aryan Brotherhood groupies (Dawn Olivieri) is there to pick him up. Within the first 24 hours however, shit hits the fan and after killing a police officer the two criminals take refuge in the house of Mr. Walker (Danny Glover) and his family – a move that might be their saving grace, if they can all survive the day.

While having a couple of Aryan Brotherhood members as the main protagonists is a chancy move, Supremacy pulls it off remarkably well. Instead of painting a film that is black and white with its good and evil aspects, writer Eric Adams and director Deon Taylor opt to have a more fully fleshed set of realistic characters. The plot itself is simple, it’s essentially a home invasion film, but the characters make the themes and moral standings more impactful without necessarily jamming it down the audience’s throats. If anything, because the plot is so simplistic, the characters and their respective actors have to carry this film instead of relying on plot progressions or twists. The entire cast is astounding at doing this too. Joe Anderson’s torn psyche devours scenes whole, Danny Glover makes a sparking connection with all moments in the film, and the creepy and often manipulative questionable character that Dawn Olivieri is asked to portray is impeccably done. While the plot seems almost too simple, it’s impactful thanks to a cast that punctuates it will all the necessary moments needed.

Director Taylor does some admirable things to make Supremacy function too. With a modern Michael Mann sense of grittiness and a strong sense of visuals, he really holds the tension and breaks it at all of the appropriate times using flashbacks or bits of humor. Take the sequence where Dee has the young boy on the floor of the kitchen as a police officer looks into the house. The camera manipulates these juxtaposed high-speed spins around the characters. It’s frantic, but it balances the small details of the script and the characters in just the right way to craft a pulse pounding tension that works. He does this repeatedly throughout the film and it’s impressive to say the least.

If there was anything that holds Supremacy back from being a damn near perfect thriller, it’s the fact that it might not have quite enough back-story for the family of the home invasion plot. There are plenty of tidbits to enjoy, including a nice father/son aspect with a local police officer, but some of the tension and familial issues that arise might have been layered into the themes about racism even more. That way when see the human connections being made in the latter half between our invaders and invadees, it comes out with even more bang.

Outside of some little things, Supremacy is a shockingly effective, thoughtful, and well executed dramatic thriller. It touches on the topic of racism in very valuable ways and shows a unique blend of thriller aspects melded with writing that raises an issue often not approached in film enough. If you are looking for a great, thoughtful film then look no further than Supremacy. It’s not a fluffy feel good flick, but it’s a film that edges on boundaries that many thrillers do not have the courage to take on.