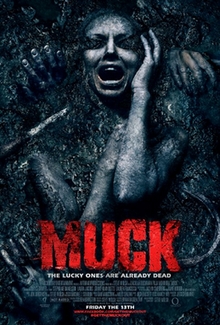 Outside of a few quips about ‘old school horror’ and ‘featuring Kane Hodder,’ I went into Muck blind. It’s not the smartest thing to do, buying low budget straight to home video horror movies blind, but I liked the idea that those two quips said to me. Unfortunately, like most quips and cover artwork on these kinds of movies, I was tricked. I was tricked into buying this modern piece of horror garbage. Perhaps if I were fifteen years old, Muck would have had me entertained. But I am a well-versed and intelligent horror film fan…and quite frankly Muck was borderline insulting to my intelligence.

A group of friends find themselves on the run from barbaric men in white make up on the night of St. Patrick’s Day. They hole up in a cabin and attempt to figure out what is going on and get help.

While the simplicity of the above synopsis could have passed off with strong atmosphere, clever storytelling, or even a half assed attempt at being thoughtful, Muck tends to think it’s way more awesome then it is…. particularly when it comes to its story telling approach. The film starts in the middle of the events of this terrible night for our protagonists. After the opening credits that are intercut with a topless woman wandering around a marsh at night (more on that in a second), the film then introduces us to our protagonists, a group of 20-somethings already on the run with one missing and one seriously injured. The film never explains how they get here. Stranger still, the film ends on a ‘to be continued’ like cliffhanger where none of the events of the film are explained. It never even hints at what is going to happen. I was bewildered and frustrated by what seemed to be terrible story telling.

Upon further research after I sat in said bewilderment at the film’s obvious lack of set up and climax, I found that Muck is actually the second film of a proposed trilogy of films from director/writer Steve Wolsh. The other two entries have yet to be filmed. And while starting the audience in the middle of the horror seems like it might be a surprise and a clever way to go about things, it really just comes off as inept and frustrating for an audience that wants some sort of pay off for the hour and a half spent with the story. Thanks for trying, but no thanks.

Worse still, Muck has almost nothing else going for it. The characters are complete assholes, the film attempts a meta-concept as they bumble through dialogue comparing their situation to horror movies, the scares and tension are lost in the marsh with the film’s attempts at humor, and Muck spends most of its time showing young women in various states of undress. Even beyond the opening credits that feature a topless woman in underwear wandering around a marsh (of which there are plenty of zoom shots on her breasts), the film then continues to act like it was made by fifteen year old boys. There is even an extended sequence where one of our protagonists makes it to a bar to call his friend to pick them (…and not the fuckin’ cops – in true stupid character choices of horror movies 101) and it shows the drunk friend with two girls. One of them goes to the bathroom and then tries on various underwear to see which one is sexiest when she beds the guy. I am not making this shit up. We spend a good portion of this sequence watching someone strut around in underwear in a mirror. It’s as if the various people behind this movie were trying to feed into all of the worst stereotypes of a horror film…and quite frankly, succeeding at it.

My recommendation is that everyone should let Muck sink back into the foul earth it was built from. The attempts at being clever never work, the writing is dumb at its best, the acting is worse – I suppose that’s what you get when a third of your cast are models and not actresses – and the few moments of “old school” horror are so obvious and generic that it’s not even worth the watch for that. Did I mention that Kane Hodder shows up for a paycheck? If there is any horror movie worse than Muck to be released in 2015, I will be utterly shocked.