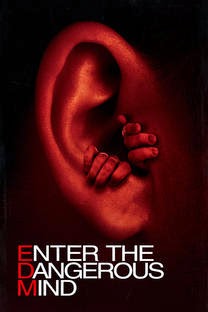 Very few psychological thrillers find the right balance between commercial viability and edgy cleverness to rise above being mediocre films. For Enter the Dangerous Mind, the results come off as just that – mediocre. There are plenty of themes and intriguing topics of potential to be found in this nifty independent film, but it mostly sacrifices them for some predictable plot twists and some missed attempts at thoughtful themes.

Jim (Hoffman) is at a constant battle with his half brother (Dekker). His brother endless berates and nags him about his life and it pushes him to find sanctuary in his music, both writing and mixing. When he meets a beautiful social worker Wendy (Reed), he decides to try to take power of his life and move on a new path…but quickly he finds himself spiraling out of control.

Enter the Dangerous Mind, for a rather low budget indie film, has some pretty solid production values. Directors Youssef Delara and Victor Teran know how to shoot a film. Using the dubstep elements of the characters sanctuary, they blend some intriguing visuals into the mix with some strong sound design. At times the film touches on an almost psychedelic nature, particularly Jim’s conversations with his brother which start off almost brashly humorous before growing darker and more devious, and the film builds a slow – but solid – first act to launch into some interesting thematic ideas. It crafts a basis for the thriller elements of acts two and three nicely.

However, there are two major faults to Enter the Dangerous Mind that almost utterly unbalance the entire film. Firstly, the film lacks an empathetic nature for our main protagonist Jim. Jim suffers from mental illness in the film and between the choices of our directors and the performance of Jake Hoffman, the sense of him being a victim is completely washed away by the focus that he is already a ticking time bomb. This sort of viewpoint that ‘everyone with mental illness is a violent outburst waiting to happen’ breeds its own sort of idiocy to the proceedings. Even worse still, the film approaches this exact subject by having the young social worker Wendy study this issue to only throw it out the window by brushing it over for the sake of the thriller elements. The potential for a smart movie is outweighed by the film’s need to water down the thoughtful undertones into a more easily consumable product. It leaves Enter the Dangerous Mind feeling almost offensive in its reluctance (or straight out failure) to show Jim as empathetic instead of psychotic.

Secondly, Enter the Dangerous Mind misses out on being clever in many of its twists and turns. Throughout the film we are shown blips and pieces of a traumatic experience that fuels Jim’s mental issues and it allows the third act to dive into a sort of detective game for one of the secondary characters (played with honesty by Scott Bakula). At this point though, the narrative gets jumbled and the film refuses to either go edgier with its twists or even to throw in a twist at all. It feels like a huge twist is coming at the end…but it never comes to fruition. Instead, the final act tends to focus on resulting collapse of Jim and Wendy – which leads to an utterly predictable conclusion.

If anything, Enter the Dangerous Mind fails to capitalize on its fringing artistic and thoughtful approaches and it culminates with the film being another mediocre psychological thriller. Some of the performances are solid, Bakula steals the show, and the directors show some intriguing artistic flourishes in their visuals and how they use their sound cues, but the focuses and execution of characters is so drastically flawed that most of those good things are lost in the sea of mediocrity. Enter the Dangerous Mind shows a bit of potential. It’s just not enough to warrant too much excitement for the rest of the film.