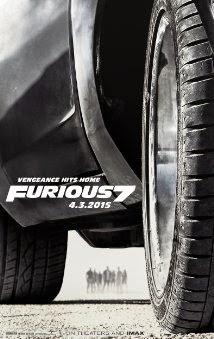 With the seemingly unstoppable train of hype and curiosity that resulted from the sudden and tragic death of Paul Walker, it was only decently obvious that Furious Seven (yes, that is the actual title on the film and this is what I will be referring to it as) would hit hard in theaters. With the numbers rolling in for a massive opening weekend already, it’s hard to argue that this film, at least in some form, doesn’t deserve this kind of attention. For the seventh film in the franchise, Furious Seven retains just as much energy, heart, humor, and high octane action as the previous two films and despite some very shocking set backs – really keeps things moving in the right direction. It’s still not quite as good as Fast Five, but Furious Seven hits all the right marks for what is sure to be one of the most entertaining film experiences you’re likely to have all year.

Life is settling down for the Toretto family. Dom (Diesel) and Letty (Rodriguez) are working their issues out since her return and Brian (Walker) and Mia (Brewster) are getting into the groove of family life with their son Jack. That is until a new Deckland Shaw (Statham) kills Han and sends a bomb to kill the rest of the Toretto clan. Now it’s up to Dom and the gang to find Shaw before he finds them and with the help of a secret program God’s Eye and a black ops gig from Mr. Nobody (Russell), they have limited time to do it.

Continuing on in the same fashion as Five and 6, Furious Seven impresses by making a film that is certainly part of a franchise (character and plot wise), but stands on its own two feet as a massive film. Within the narrative, Seven tends to be a little sporadic as it blends two plot lines, Shaw versus Toretto and the God’s Eye heist, into a globe hopping adventure that tends to have to occasionally force scene changes. Oh wait, you gave the program to your friend in Abu Dhabi? Guess we go there to blow things up! You mean the hacker is being escorted by a warload in the mountains? Let’s parachute cars in there! Luckily, James Wan, new to the franchise as director and new to the genre as a whole, steps right into Justin Lin’s shoes and seems pretty comfortable in understanding how this franchise should – and needs – to work. He might even shoot the fight sequences a smidgeon better. Seven throws in all the necessary moments needed for a Fast & Furious flick (including more car racing and racing culture that is starting to feel a bit out of place in the action films) so fans will be excited to see repeated characters and jokes that still work.

Truthfully though, the Fast & Furious franchise has never been one for great, logistical storytelling. This franchise has bloomed into a full on adrenaline pumping punch to the face and Seven does just that. Whether it’s the spectacle of seeing ‘skydriving,’ having Statham act as a sort of evil British Kool-Aid man and bursting into every locale with guns blazing, or the ridiculously complex ‘battle of Los Angeles’ in the finale – which features two fist fights, drone warfare, and The Rock taking on a military helicopter mano y mano, then it’s here. It might not quite have the spectacle of the airport finale of 6 or the Rio heist of Five, but even the Abu Dhabi sequence (which features a “flying” car that careens through THREE skyscrapers) attempts to go for the gold. The entertainment and style of watching a team of charismatic ‘family members’ continually destroy cities is infectious.

Yet with all of the bullets, explosions, and people being hurled through glass, it’s the ensemble feature of Seven that wins for having the most heart. Snicker if you want as Diesel continues to grumble growl about family or the continued presence of gimmick secondary characters, this film has an 8-cylinder heart that oozes its charm into every aspect. Sure, Statham plays one of two villains in the film (the other is a warloard played by Djimon Hounsou) and The Rock is sidelined for most of the action, but boy oh boy do they make every minute of their screen time worth it. Statham’s entrance into the film is something of legend. Kurt Russell shows up to simply devour scenes as the charming government black ops commander Mr. Nobody and even both Tony Jaa and Ronda Rousey get to make the most of their fight-oriented limited screen time. They utilize Jaa too much greater effect than Taslim received in 6 and it’s these kind of learning curves shows that the franchise is still perfecting itself. Hell, even if a character like Hector (popping up for his first time since the first film) can get a smile out of the face of an audience, then this film is doing something right.

Alas, there is an elephant in the room though and that’s how Furious Seven has to cope with death of Paul Walker in mid shoot. To say that this film handles it in the most heart felt manner – and shockingly artistic way in the final ten minutes – is an understatement to the work of the cast and crew. The moments of CGI Brian can be a bit obvious and the editing of some early scenes and a second fight with Tony Jaa is also a bit heavy handed to cover up body doubles, but instead of looking for these things straight out – the film reminds us that it’s about the heart that goes with these efforts and not the results themselves that make this ‘one last ride’ worth it. If the crying people in the theater were any indication, Seven handles this aspect so fittingly that it deserves its own award for overcoming such an obstacle.

Call it big. Call it dumb. Call it what it is. Furious Seven is the kind of film that shows that no matter what production problems are present or even how patchy a script can be, that a film can be both entertaining and heartfelt with the right intentions. This film knows exactly what it is, what it’s fan base wants, and delivers on all accounts. Furious Seven might crush the box office this weekend with its hype and the curiosity of an audience looking to see if the entry can be pulled off through it’s issues, but it’s going to remain one of the better action films of the year by remaining true to what it is. If the seventh entry of this franchise can remain this much fun, then I’m already prepared to purchase tickets for the next seven entries.


R.I.P. Paul Walker. Thanks for the cinematic memories.