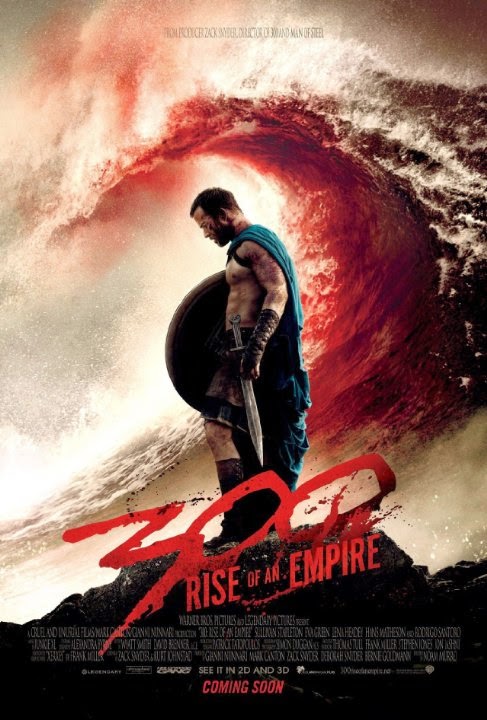 The original 300 didn’t quite hit me like it did so many of my friends and colleagues when it was released. It was a campy fun action spectacle with style slathered on, but the pacing and narrative issues certainly held it back. For the sequel 300: Rise of an Empire, I at least had the right mindset going in and the resulting expansion of the 300 universe was an massively enjoyable watch – even if it continues to have some major issues with scripting and characters.

While King Leonidas and his 300 Spartans are flexing their muscles and baring their ridiculously white teeth, the other Greeks have taken to Persia’s enforcement of power with a bit more strategy to match their gusto. For this chapter of the saga, it’s up to Themistocles (Stapleton) and his navy to make sure that the Persian army doesn’t attack by water and this is going to make him go head to head with Xerxes’ greatest general, Artemisia (Green.)

At its core, 300: Rise of an Empire is essentially just more 300. You can change the color scheme and you can add in navel battles instead of cliff battles, but the new director follows in Zack Snyder’s footsteps so closely that had I not known, I might not have been able to tell the difference between the two. Stylistically, the films are ridiculously similar and it’s all digitally toned men killing each other with CGI gore in slow motion, but this time around it’s as if they decided that 300 did NOT go far enough with violence and exploitative elements. The violence is doubled, the gore is doubled, and there’s a lot more nudity to go with it. Some of it doesn’t quite make sense like how specific wounds could geyser that much blood and the sex scene that’s thrown in feels a bit forced – which might be intentional, but let’s be honest, it wholly makes this one a more entertaining film overall. At least in the Blood Brothers book.

Within the scope of more violence and bloodshed, Rise of an Empire does attempt, in good will, to change things up just enough to make it more entertaining. The naval battles are not just a lot of rowing and shooting arrows at one another like one would think for a swords & sandals flick, but it’s got more action than the first 300. Splintering wood, sieges, and even a massive explosion (they somehow got to explode a damn ship in this movie) are all par for the course here. The action is driven mostly by Eva Green as the film’s main villain, who simply spits her often silly dialogue with enough energy and venom to sink a thousand ships alone – the line “You fight harder than you fuck” is ripe for hilarity – and Stapleton, as this chapter’s hero, seems to pale in comparison despite his best efforts to be manly and philosophical about ‘freedom’ and other heroic tropes.
All in all, 300: Rise of an Empire is quite ridiculous and rarely stands on its attempts to be thoughtful in its dialogue or plot. The idea that it occurs at the same time as the original 300 makes for some intriguing beats for reoccurring characters from the first film, but it doesn’t quite carry enough narrative punch to truly rise above its predecessor. However, the clever use of naval action, the furious leaps of violence, and Eva Green make sure that this film is inherently more enjoyable this time around – so take it with a grain of salt.

Here’s to hoping that the cliffhanger ending is a true calling card for more sequels in the future. This is a silly franchise at this point, but one that entertains enough to bring me back for more.