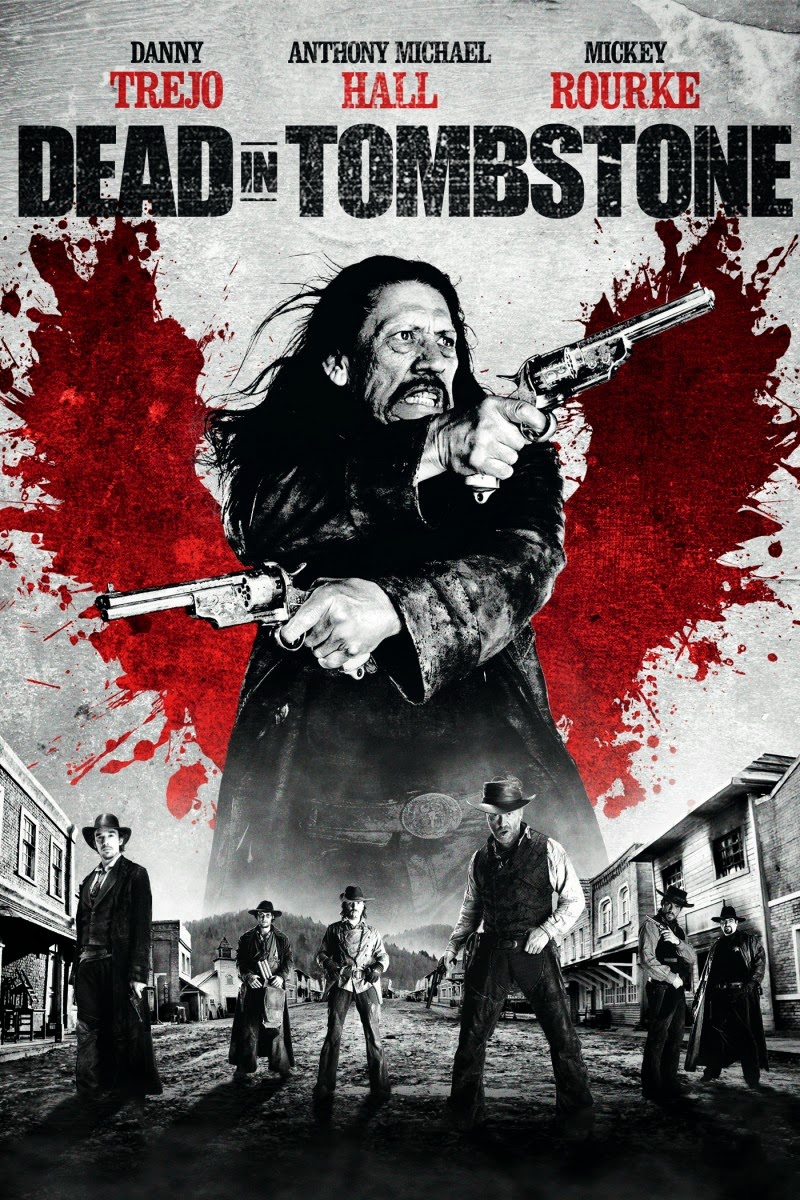 Modern westerns are hit or miss to begin with and usually exist as either terrible or terrific. Occasionally, a film arises that is both terrible and terrific. For a film of this caliber (oh yes, that pun is fully intended), look no further than the supernatural western Dead in Tombstone. Playing out like a version of The Crow in the wild, wild west, this modern western has so much fun packed into its run time that it upgrades itself to an A-grade B-movie. This is not a film for everyone with its obvious plot progressions and often quite silly aspects, but for those in the right mood or with the right intent Dead in Tombstone is a righteous entertaining flick.

For Guerrero (Trejo), the day couldn’t possibly get any worse. After freeing his brother Red Cavanaugh (Hall) from the hangman’s noose, a big score of gold sits on the horizon for him and his gang. Too bad, the gang has other ideas and Red takes his life so that they can take over a shit town and keep the gold for themselves. Sent to hell, Guerrero makes a pact with the Devil (Rourke) to be returned for 24 hours to kill the six members of his gang.

The plot is so ridiculously B-grade that it’s hard not to buy into it almost immediately. A returned bandit from the dead out for vengeance in the wild, wild west? Corrupt marshals, a gang of gimmicky fighters and thieves, and how about a Devil that also part times as a blacksmith of sorts? This shit is catered to those with questionable tastes in film (like us here at Blood Brothers) and while the film certainly could have even gone further with its outrageousness, it plays it pretty straightforward - a move that makes it either better or worse depending on the viewer’s tastes.

What’s even better is that the film is built to be entertaining beyond the plot. The casting is spot on. Trejo is another great anti-hero, Anthony Michael Hall seemingly devours his time as a duster wearing greedy villain, and Rourke saunters around being delightfully creepy as the blacksmith Lucifer. It’s hard to say that outside of these roles any of the secondary parts are all that memorable, but with these three to eat up screen time, one can overlook it. Under the direction of vulgar auteur hero Roel Reine, the film plays up its quirky nature, dark off beat humor, and violence. Did you ever want to see Trejo blow a man’s face off with a small cannon? How about ride up a flight of stairs in a saloon on a horse? Perhaps stage an ill advised two-person raid on a gold mine littered with well-armed baddies? This is the kind of film that has all of this wrapped up.

Occasionally, the film missteps with its blend of modern action and old school vibes. The lead female character Massey is given some of the worst back story and dialogue on the planet, ultimately serving as a plot device more than a fun character, and the strange choice of score feels out of place at times with its modern twists on older foundations. However, those are usually par for the course for these kinds of films and it didn’t hinder the overall entertainment value that Dead in Tombstone delivers.

If you read the synopsis and think to yourself ‘boy, this sure sounds awesome,’ then yes, absolutely you should do yourself a favor and watch Dead in Tombstone. If you read the synopsis and think ‘boy, this sounds like shit,’ then by all means skip it and run for the hills. Dead in Tombstone is one of those B-grade flicks that owns its place, knowing its not up for any awards, but is made with enough energy and love to excel at what it does. Here’s to hoping that the film garners some sort of franchise. Trejo is already 70, so it needs to happen now rather than later.