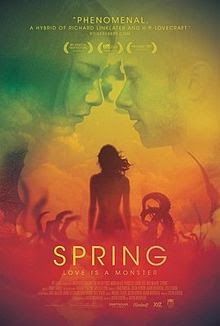 Spring is one of the 'freshest' movies I've seen in quite some time. As I was watching it, the thought that kept cropping up into my head was "this feels new, and yet familiar, but yeah, definitely new". That is my biggest compliment for the film. It takes the familiarity of a love story and puts a spin on it via a mesh of various genres, making it something quite different from anything I've seen recently.

A man loses his mother and his job and moves to Italy. He falls in love. That is all I'll say on the story. It's simple. It's straightforward. It's brilliant. We see his interactions with various people in a Ben Wheatley style set of very believable vignettes as he wanders around in Italy with nothing to lose.

It's what I really enjoyed about the film. I just liked the simplicity in its progression of the story, but it never drags or feels slow. You follow our leading man, Evan, around in his new life in Italy, watching his relationship with a mysterious woman he meets by chance slowly unfold and bloom into something... unique. I really hate spoiling things, but if you you have not seen any advertising or read up on anything about the film, then stop reading this review, do yourself a favor, and seek out Spring. It's one of my favorite movies of the year so far.

The chemistry and romance that rather quickly develops between the two leads is well executed and highly believable. When things go crazy towards the end, some certain people may be put off by it depending on your taste for what you like or expect in or out of movies, but I was able to go with it, because it's a movie, and not everything should be grounded in reality.

Also, as a whole, it has this great free flowing spirit about it, all the way down to the cinematography and camera movements, which I was highly impressed with [aside from some lighting issues, but hey, considering almost everything is shot outdoors and on a smaller budget, it looks gorgeous]. I still wonder how they pulled off some of the shots the way they did. One of the co-directors of the film [Aaron Moorhead] actually did the cinematography himself, which as an aspiring filmmaker myself, sort of delighted me once I saw the credits roll.

There's also a nice blend of practical and digital effects. The only visual that threw me off a bit was this slow motion shot of blood spraying from something [no spoilers], which hindered the experience slightly [along with some effects that 'flail' about here and there]. Also the effects for you know who looked wonderful and actually caused me to wear a big goofy disturbed smile on my face.

I've heard from various people through different reviews and articles on the film, that Spring is a big step forward for them in almost every way possible. I never got to see their previous film, Resolution, but this has me wanting to seek it out more than ever. It's clear they have a real passion for cinema and it shows on screen. Spring is most definitely a breath of fresh air. Bravo guys!