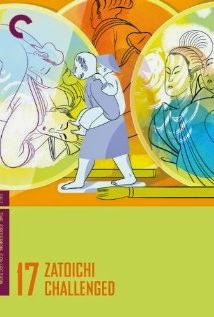 “If you insist. I’ll just sit over here and take in the sights.” –Zatoichi

With a title like Zatoichi Challenged, one would assume that this seventeenth entry into the franchise would pose a villain so massively evil that even the charming and often good hearted Zatoichi would be crippled at the idea of it. However, unlike the previous entry Zatoichi the Outlaw, Challenged is a rather subdued and emotional film – less focused on action and violence and more about the storytelling and characters. The challenge of this one is not necessarily the obstacles that our hero has to overcome, but the emotional impact of those obstacles. It makes for one of the best films of the series.

While on the road, Zatoichi (Shintaro Katsu) finds a dying woman in an inn with her young son. He swears to take the little boy to his father in a nearby town. On his journey though, he uncovers some strange happenings with the local boss and finds himself crossing paths with a strange samurai who seems to be both friend and foe…

While the last film Outlaw saw the franchise switch up the formula a bit and boost the complexity of its story, this entry goes back to the core of the series – much to some fans dismay. The results though, particularly with having director Kenji Misumi return to the helm are rather efficient and effective. The film bares a remarkable resemblance to the director’s earlier film Fight, Zatoichi, Fight as our hero has to think about the legacy he leaves as a caretaker and a role model, but Challenged improves on many of those motifs. The relationship between Zatoichi and the boy Ryota (who comes off as horrifically annoying – for a purpose) is heartfelt and often humorous as each one figures out how it’s going to work. A scene where Zatoichi gives Ryota’s drawing of his mother to the father is particularly subtle, but wholly effective in its emotional beats, for example. It’s this core element that makes it so effective throughout as a story narrative even when the film starts threading in more traditional Zatoichi vs evil bosses plot aspects.

From there though, Misumi has quite the handle on how the narrative should flow between the character beats and the plot progressions. Continued hints in the dialogue and story build a solid foundation for the finale to rest on and the continued appearance of Jushiro Konoe as a mysterious samurai builds perfectly towards the last time that their paths will meet. The obvious clash at the end of the film starts off in a more generic tone as Zatoichi finds himself at the hands of another group of baddies, but it’s the final showdown of swords that really stands out as one of the better action set pieces of the franchise. The last twenty minutes of snowy tension are impressive as the edge-of-your-seat battle ensues.

Zatoichi Challenged is often criticized for its simplistic return to the basics and similar premise, but this allows Misumi to work some magic with the script. The character work is heartfelt in its impact (the final scene on the bridge is a tearjerker) and the action is top notch in its execution – particularly in some of the subtle character beats that show up in mid fight. Some might call it simple, but Challenged is efficient in its story telling and subtle in its detailing. The results are surprisingly forceful if one is looking for it.