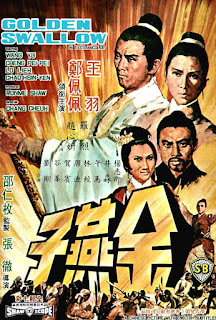 Despite being a film that had a duel lead character focus, Come Drink with Me saw a massive boost from the success of the character Golden Swallow. Which, of course, deemed her worthy for a sequel…and one with the character name as the title. Thusly we are treated to Golden Swallow, the continued adventures of our deadly female enforcer from Come Drink with Me. Don’t be fooled by the title though as, once again, Golden Swallow essentially plays second fiddle to not only one protagonist, but also shares most of her screen time with her side kick. The execution of the film is solid enough and showcases some unique elements for director Chang Cheh, but overall it’s hard not to be a little disappointed with the direction it took.

When Golden Swallow (Chang Pei-Pei) is poisoned in a battle, she is saved by an unlikely friend in Iron Whip (Lo Lieh). They quickly become friends and allies as she recovers only to find out that a mysterious vigilante Silver Roc (Jimmy Wang Yu) has been using her name to raise hell with various villainous factions. So they set out to uncover the mysterious swordsman’s secret and find out why he is setting her up.

To be honest, the concept for Golden Swallow is more than a little awesome. It’s the heart of wuxia with little in the way of the fantastical gimmicks (outside of one “invincible” move that is built up in the plot) and the idea of having our three main characters (all played with top notch talent from the Shaw Studio) moving towards a destined crossroads had me excited to watch. Unfortunately, the idea is much greater than the execution overall.

For Golden Swallow, Chang Cheh feels relatively reserved in his usual style and rather unique. The opening fight sequence is shot with shaped ‘bars’ to focus the viewers attention on small details (awesome!), but there is one moment where Jimmy Wang Yu’s vigilant character delivers a monologue on a white stage in front of massive Chinese characters of his letter (WTF!). This in turn makes some of the structure and narrative feel a bit forced. A romantic love triangle feels a bit loose at the hinges and splitting the narrative inbetween three lead characters undermines a lot of the more impactful emotional punch the film could have had. Keeping Jimmy Wang Yu’s Silver Roc more mysterious for longer would have intensified some of the drama and tension, but the film plays out in a lot of obvious manners. Not to mention, once again, Cheng Pei-Pei feels like an inferior character to her co-stars in many aspects – and the film seems to really pull away from the characters status as an established killer and focuses more on her more feminine and romantic attributes.


However, Golden Swallow does do a decent enough job at playing its rather obvious plot elements and undercooked concept in some entertaining ways. While the film might have benefited from keeping Jimmy Wang Yu more mysterious for the plot (I would be tempted to retitle this film as his character’s name instead of Golden Swallow), his torn psyche and penchant for badassness makes up for a lot of plot’s issues in building his character. A massive “raid” on a clan’s fortress by him results in some serious body counts in the second act (and perhaps one of the first uses of ‘shaky cam’ that I can think of to create that chaotic effect of having him battle an entire army) and the finale features a classic wuxia sword fight between him and Lo Lieh, where we get to see both characters really deepen their rather by-the-numbers roles in their actions. Golden Swallow most certainly ends on a big high note, despite a rocky ride getting there.

While it’s difficult for me to say that Golden Swallow isn’t disappointing in its failure to maximize its potential concept and actors, the film is a serviceable and grounded wuxia powered on great performances and a unique approach from Chang Cheh. After the spectacular first film though and the realization of how awesome this film could have been, it just seems a bit too patchy to rank up there some of the other Shaw Brothers classics.