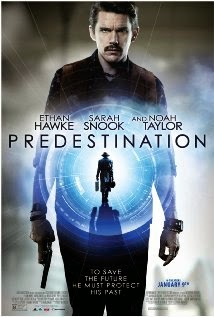 Time travel films can be hard to pull off. Unless you keep it basic (the first Terminator) then the results are often times heavily scrutinized by science fiction fans…no matter how entertaining or well executed the film itself is. For Predestination though, making the film from a classic Robert A. Heinlein short story added even more pressure to ‘get it right’ and it was pretty astounding that The Spierig Brothers pulled it off at all. Not only do they pull it off, they do it damn near perfectly to deliver one of the most mind-boggling time travel films of all time.

For our protagonist (Hawke), time has become so fluid that his own mind is seemingly breaking under the pressure. On top of that, his mission to uncover a time jumping terrorist known as the Fizzle Bomber has left him scarred both physically and mentally. His final mission, with the help of a young writer (Snook), might allow him to stop the Fizzle Bomber – and uncover a paradox that could end time itself.

To give this some context, I have yet to read the short story that this film is built on and thusly have no sort of comparison in that realm for the true fans out there. Watching the film though, I don’t think it ever felt necessary to read the book for more details or for better clarification of some of the more cerebral elements. Predestination most certainly feels like a contained and fully told story. Outside of the jumping structure, never did it cross my mind that it might have been said better in the source material. Knowing Heinlein stories though, I’m sure the story itself is a fascinating endeavor.

One of the big issues I had writing this review is that the storytelling in the film is so full of unique twists and massive epiphanies in its narrative that I didn’t want to give too much away to any reader who is interested in this film. As much as the film is well executed, there is a sort of unfolding experience that really makes it so damn good. The first half of the film is somewhat disorienting and strange as it spends only a few minutes setting up the plot about the Fizzle Bomber and then spends the rest of the first half in what appears to be a tangent describing the life of the young writer played with precision by Sarah Snook. Don’t let the seemingly endless recounting of events fool you though, every detail is important here and in the final act some of the smallest details are enough to twist the plot and characters in some wicked directions. The plot twists are so ridiculously well built and executed, you might want to watch it a second or third time to try and catch all of the subtle things that are thrown at you.

To slather some icing on the cake, Predestination doesn’t only have a ridiculously mind blowing story, but it’s stunningly well executed. Hawke throws down another top notch performance (as always), but he might be outshined by Sarah Snook. Snook’s character arc is so impressively large and yet told so subtly in the small moments that she just leapt to being one of the names to keep an eye on in genre cinema. The Spierig Brothers have a knack for flow in keeping the story moving, despite having the film only edge on being a thriller, and for the visual narrative to compliment the script like this… it sort of baffles me that they haven’t had their names brought up in conjunction with some of the bigger projects being announced in genre films. They execute this perfectly.

The slower narrative and focus on the details may not appease all science fiction fans, but if you invest yourself into the characters then the plot pays off in dividends. The execution on and off screen is brilliant, the story is ballsy and poignant, and the resulting fall out of the discoveries for the viewer sticks with you for days after the fact. In an age where science fiction is too often considered a sub-genre of action film, Predestination is refreshingly intent and impactful with its focus on story and character. Science fiction fans rejoice, Predestination is a modern classic.