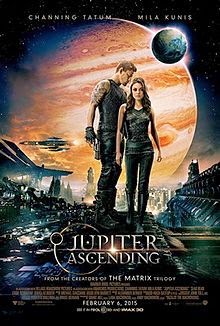 For the Wachowskis, the last handful of films has seen them bite off more than they can chew either critically or financially. Since their iconic Matrix films dominated the action science fiction spectrum, a series of interesting (if not somewhat ballsy) choice of films has made their fan base turn from rabid to flaccid. Their latest, Jupiter Ascending, is a massive space opera with a lush universe, monster action set pieces, and a quirky sense of direction. It also happens to be an entire franchise worth of story and characters jammed into two hours. The result is something of an oddity in itself where the film entertains in its absurd excess, but rarely has the legs to actually execute when needed.

For the young Russian immigrant Jupiter (Kunis), life is repetitive and unfulfilling as a maid with her family. She dreams for something bigger for herself. Well, that bigger just found her in the form of a series of intergalactic bounty hunters, assassins, and police. As it would so happen, she’s of royal genetics of a massive corporate (and corrupt) family that owns entire planets. Can she claim her destiny as one of the big shots the universe or will her evil blood line spoil the dream?

Jupiter Ascending is a lot of plot to consume. And much like the character Jupiter (and Mila Kunis’ deer in the headlights performance), the audience sort of has to bounce around the galaxy and just go with the flow. If one stops to think too much, then I guarantee they will be swept away in the flurry of monsters, explosions, and random side characters that all seem to be misfits from the island of Dr. Moreau. This is, inherently, the biggest obstacle that this film cannot hurdle – its own concept. As we are subjugated to three pouty lipped villains (of various color coded décor castles) and so many subplots that range from ex-military anti-hero romantics to genome harvesting to the legalities of reincarnation in space law, it’s ridiculously hard to keep up. When I said there is an entire franchise worth of material in this film, I’m not exaggerating. It’s enough so that the rather mundane basic character arc for our heroine Jupiter, a commoner thrust into power and having to make big moral choices, it doesn’t feel weird enough.


Luckily, the Wachowskis as directors overcome their scripting issues by making Jupiter Ascending so excessive in its ridiculousness that it’s damn entertaining. The lush CGI visuals, the blend of special effects for the monsters, and the Wachowskis own knowledge of how to showcase great use of space (pun intended) for their action set pieces. While Kunis struggles a bit in the lead, Tatum seems to be having way too much fun as a shirtless wolf man on hover-roller blades and the rest of the cast seems to be hamming it up in the other roles. This leaves quite a bit to be desired as “depth” or “abilities for the audience to relate” to the characters on any level, but fuck it…WOLF MAN ON HOVER-ROLLER BLADES FIGHTING DRAGON MEN! It certainly appeals to the B-grade action fan in me.

Much akin to their Speed Racer film, Jupiter Ascending has a trouble justifying just what audience the film is geared towards. It’s too complex in legality and capitalism criticisms to be a true family flick and it’s far too cartoonish to cater to adults exclusively. There are moments of the Wachowskis knack of injecting philosophy and thoughtfulness of concept in the film, but it’s wrapped up in so much glitz and plot that it will take some hover-roller blades and some genetic bee-sense to find it. As is, it’s a ridiculously outrageous form of entertainment (if you have the right mindset) that is an A-budget B-grade film. If you are looking for deep characters and poignant narrative, it’s best to look somewhere else.