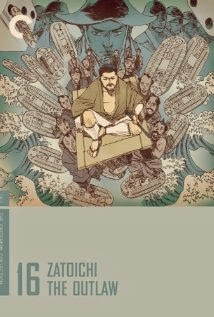 In my last review for the Zatoichi franchise for Zatoichi’s Cane Sword, the point was made to praise the franchise for almost always putting the storytelling first in the films. This was a big reason for the continued success of the films. For the sixteenth entry and first for the new production company Katsu Productions, Zatoichi the Outlaw sacrifices a lot of its narrative structure and story for the sake of being a more ‘entertaining’ film. Outlaw is the first of the franchise to really start twisting the established formula a bit, but for a fan working through the series the sacrifices are not nearly worth the new elements – although it’s easy to see why one would love this one too.

Zatoichi (Shintaro Katsu), like every other week, stumbles into a town in strife. Two yakuza bosses are at a standstill with one another and the rice farmers in the middle are the ones that suffer. Zatoichi, in an effort to help, aligns with Asagoro (Rentaro Mikuni) and a swordless samurai Ohara (Mizuho Suzuki) who both stand for the people. When he finds himself wanted by the law though, Zatoichi begins to think that perhaps he was played as a pawn…

Overall, the story is sound. It still works in many of the same tropes we have come accustomed to with this series and the way that the two sides play out a sort of chess match using Zatoichi as a piece makes for some pretty entertaining moments. The film is one of the darker entries in the series thus far (if not the darkest) as we see less of a clear cut line between bad and good – including in our hero Zatoichi who carries more of that anti-hero vibe this time around. The film is also the most violent in the franchise too. More bright red blood graces the screen, including a bit where a woman accuses Zatoichi for being a heartless killer for not being able to see the blood he has spilled, and there are more violent visual consequences for the fights that erupt. This is the first time we’ve seen a decapitation in the series and it’s impactful. Even a lot of the subplots result in darker material including a couple of suicides that makes for some shocking revelations. Outlaw is the kind of film that embraces a more pulpy and grindhouse tone and one that we haven’t seen taken to this extent previously for the blind swordsman films.

Despite the fresh gritty feel and more violent content, the problem remains that Outlaw is a pretty scattered narrative. Due to more epic story content, the film has to introduce us to a lot of characters who don’t resonate as strongly and the film has to take a rather big tangent in the second act when Zatoichi goes into hiding as a masseur in another village that feels unnecessary at times. The chess game of yakuza is almost too complex for an hour and a half film and adding on a sort of farmer uprising just adds to the volume of story and characters the audience has to sift through. It gets to the point that both of the suicides in the film lack the emotional punch to sell the dark plot progression. One character is found hung by Zatoichi and instead of being ‘Oh my!,’ I spent the next three or four minutes trying to remember who that character was and why he was important. It undermines the emotional impact that scene should have had.

Zatoichi the Outlaw is still an entertaining and ambitious film for a franchise that has seen itself stick to the formula for so long. The narrative is far more striving in reach, the content is darker and more violent, and Zatoichi continues to impress as a character who is left as a victim of circumstance.  There just happens to be less impact emotionally due to those same reasons and the film needed another half hour to really give us time to digest the various characters and motivations. Fans of more grindhouse inspired swordsman fare will dig into this one for sure, others may have the same hesitations that I did. It’s good, but it could have been great.