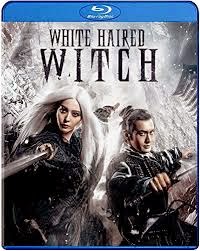 There is a very fine line when wrapping any kind of film in fantasy elements. It lends itself to some spectacular visuals, perhaps some fun moments even, but too often it drains a film of what the real focus should be: storytelling. For White Haired Witch (also known as The White Haired Witch of Lunar Kingdom outside of the US), the fantasy elements are meant to enhance a romantically driven wuxia war epic – but instead muddy the narrative. And that’s just one of the problems this film has. White Haired Witch is akin to navigating a massive hedge maze outside on a day that's 130 degrees. It's too long, frustrating to navigate, and while it seems like it should be a fun time, comes off as irritating and draining in the end. It has a few redeemable pieces, but in the end it’s a massive misfire.

When Zhuo Yihang (Huang Xiaoming) finds himself as the new head of Wudang, he finds himself framed for murder and relying on a rebel leader Jade Raksha (Fan Bingbing) who is herself being cornered by corrupt government officials. Together, they will have to find the strength to fight off an impending war and find the true villain behind it all…and perhaps find love, you know, while they’re at it.

There is most certainly a very cinematic film to be found at the core of White Haired Witch. Unfortunately, thanks to being based on one of those massively epic Chinese novels, it tries to stuff so much material into one film that there is not enough energy or time to make it work. Like the maze that the film was compared to earlier, White Haired Witch branches off to introduce a slew of characters, many of which appear for one or two scenes, and a plethora of tangent side stories – only to fail to give them depth or relevance and thusly collapse as a dead end. The other heroes of Wudang…who? Jade Raksha’s sister? She’s there for a couple of sweet fights. A random marriage plot for Zhuo Yihang to another woman? Sure. Let’s just jam it in there! To make these character arcs work for our two romantic protagonists - which is often a forced stretch itself, White Haired Witch has to move at the speed of light, which has the regrettable effect to leaving the audience confused and in the dust.


On the plus side, the visuals are fun with the color schemes and big flamboyant cheesy sets – I saw Tsui Hark’s name in the opening credits as an artistic consultant – and the two or three action sequences are well designed wuxia sword fighting romps thanks to action direction by Stephen Tung, who did the extremely impressive War Fu flick Saving General Yang. The film also has the benefit of having the charismatic Vincent Zhao as the film’s villain. Watching him desperately try to add layers to a rather one note kind of character (who they give one scene of motivation at the end of the film…better late then never) is a bit of a struggle, but after the first 20 minutes of watching all of the actors struggle with the script made it a bit easier to swallow.

White Haired Witch is just one of those films that no matter how much talent or budget you throw at it, the script is flawed enough that all of the good pieces fall through the cracks. The narration is completely muddy and scattered, the acting is horrendously cheesy to go with some of the eye rolling romantic moments - the last five minutes had me in a fit of laughter, which is never good for what should be bringing tears to my eyes, and the fantasy elements only make for the proceeding darker moments of war torn people and political undertones feel at battle with one another. Sure, it has a handful of solid wuxia fights and seeing Vincent Zhao as an evil badass worked for me, but overall White Haired Witch is a pretty giant missed opportunity through and through. Stick with Painted Skin: The Resurrection if you want some crazy fantasy wuxia. Or better yet, go watch Ronny Yu's The Bride with White Hair. I’m going to see if I can somehow find my way out of this damn maze now.