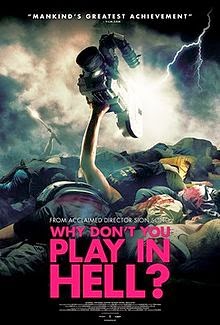 Most of Sion Sono’s career has been crafted on the pillars of darkness, quirkiness, and super-violence, so it’s no huge surprise that Why Don’t You Play in Hell? is a film built on pillars of darkness, quirkiness, and super-violence. From the films that I have been privy to witness from this madman of cult film, this is a running theme of sorts and he always presents his material in some of the more challenging ways to a viewer. For this one though, he goes even further. While the film presents itself as a comedy for a majority of the film, it’s truly a Sion Sono flick through and through with its blend of violence, disturbing moments, and outrageous structure. And it’s pretty fuckin’ brilliant.

The Fuck Bombers are a young group film makers with a desire to make the world’s best film. On the eve of a yakuza raid, they will be asked to film the ordeal as a favor to the boss’ wife who is due to be released from prison after ten years. Using the bosses daughter as the star and the real life violence to grace their screen, this is the time The Fuck Bombers have been waiting for…the ultimate film.

The core of Why Don’t You Play in Hell?’s concept is that of a love letter (and satirical vehicle) for old school Japanese cinema…albeit done with a modern twist. Sion Sono is one of the those film makers who can take grindhouse elements and add enough flair to appeal to arthouse folks and the same goes for this one. Why Don’t You Play in Hell? is both charming and challenging in many ways. It took myself two viewings to really buy into what Sono is offering. The structure of the film is a bit crazy as the audience is submitted to what is essentially three separate story lines that all seem to be filled with lots of random tid bits and tangents. Don’t mistake these smaller segments as filler though, Sono uses them to bring the stories together in the third act.

Even beyond the structure, the film certainly felt very challenging. The humor was much more clownish than I expected and there are a lot of characters that are introduced. If it wasn’t for the talent of the actors/actresses in the film and the obvious ‘larger scope’ concept of Sono, this film would have collapsed. Luckily, the performances are top notch all the way around, the humor (while occasionally a bit extreme) is effective, and the visuals give the film an almost fever dream like quality at times in its satire. A repeated toothbrush jingle or the use of a waves of blood are prime examples of the extremity of the humor/satire that is present in the film.

Then, of course, one has to mention the last act of the film. This violent yakuza clash is not for the weak of heart as Sono (in true Sono fashion) never shies away from the violence and often uses it to great comic effect. The digital blood can be a bit of a turn off, particularly when the film is a sort of homage to old school film making, but the resulting clash of worlds/characters/plots is so ridiculously epic that it’s hard not to love. The sheer brutality is impressive and there is just enough humor and heart in the final act that it works in perfect balance.

While I would be hard pressed to call Why Don’t You Play in Hell? Sion Sono’s best film, I am very tempted to say that after two viewings it’s probably my favorite. The strange clash of genres, the challenging structure and writing, the spot on performances, and the final act make for a film that will last the test of time easily for cult fans. For the casual movie watcher, Why Don’t You Play in Hell? may very well rub you the wrong way – if not in many ways. For those willing to buy into the weird homage/satire of the film, it’s a sure fire classic for the ages.