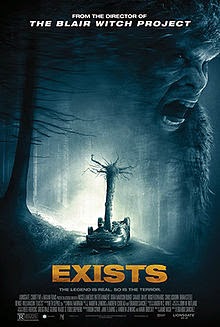 While Eduardo Sanchez couldn’t seemingly translate the success of The Blair Witch Project into major films for major studios, he has found a ton of success riding the undercurrents of the horror scene in low budget features that really work for his style. Whether it was his intense science fiction romp Altered or the dark and gritty psychology of Lovely Molly, Sanchez has cut some pretty solid features. After a return to found footage in a short in V/H/S/2, Sanchez takes on the format once more with his Bigfootsploitation flick Exists. While the film still succeeds in many regards, this is handedly my least favorite from the horror auteur and eventually drifts into being a little too safe and not being dynamic enough overall.

When it comes to secluded cabins for friends to party at, two brothers have the best one that their uncle owns. When they get there though, they find out that the place isn’t quite as secluded as one would expect…and the noises and footprints around the area are only the beginning of the terror they will experience.

As far as Bigfootsploitation goes, there are so many worse films than Exists. Like…a lot worse. It just so happens though that due to the director, there are high hopes and certain expectations that come with Exists and the film has trouble living up to those expectations. So let’s start with where this film does succeed. Sanchez has always had a knack for pacing perfection and that still rests in this film. Due to a lacking script and characters, Sanchez does rightfully keep Exists at a lightning quick pacing and it’s a film that deserves that kind of efficiency. It also has some really fun set pieces within its relentless drive – a camper wreck is wonderfully shot and set up in the limited scope of found footage. This kind of knack for filmmaking and creativity in limited boundaries is where Sanchez struts his stuff.

Unfortunately, outside of those moments of fun and the pacing, Exists does exactly what its title says: no more and no less. The characters are poorly built paper-thin examples of the cliché protagonists of any ‘cabin in the woods’ horror flick, the plot is even less fleshed out, and many of the scares and tense moments are of a ‘been there, done that’ fare. Sanchez might have a knack for making material out of nothing, but here he seems a bit on autopilot. By the time we get to the ‘why’ for all of the ‘what,’ one rarely cares what is going to happen let alone if the twist is going to be relevant to the ending. Exists just exists and doesn’t seem intent on making much of an impact.

With a different context, Exists might have been a fun B-grade horror flick. At this point though, there are enough found footage horror films that this one feels uninspired and hum-drum as it plays out the basics. Sanchez has a long and fruitful career in front of him, so don’t judge it on one misfire.