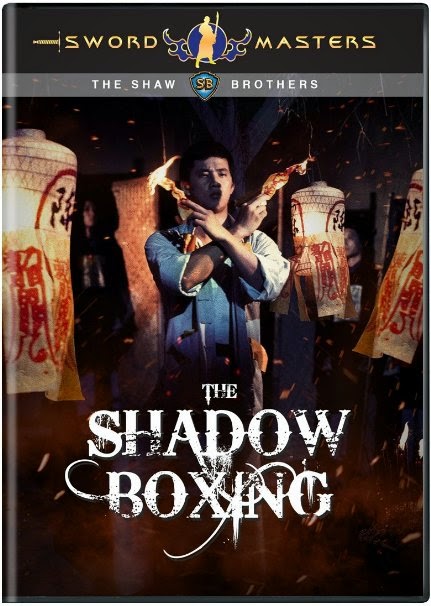 Lau Kar Leung’s career as a director and choreographer took some unique turns during his time with the Shaw Brothers and one of the more interesting twists of style comes in the form of The Shadow Boxing. Also known as The Spiritual Boxer II, this film ably mixes a variety of styles and genres to tell its story of a ‘corpse herder’ and his involvement with an underhanded murder conspiracy. While the resulting film doesn’t top the charts in any of the various genres it uses, it’s hard not to have a fun time with the film in the end.

A corpse herder (Lau Kar Wing) and his apprentice (Wong Yu) have one hell of a job to do as they have to transport 9 dead men to their various home towns. The way that they accomplish this is by using various spells to have the dead transport themselves under their guidance at night – hopping vampire style. Unfortunately they have one corpse (Gordon Liu) that seems to be giving them a lot of trouble and when they accidentally uncover a murder conspiracy on their trek – they might have to use their spiritual boxing kung fu to just make it home.

To be perfectly honest, I’ve never seen the first Spiritual Boxer film so I have no idea how much this sequel is connected to it, but it is quite obvious that one doesn’t have to see it to enjoy part two. Don’t let the use of the Chinese hopping vampires trick you though, this film has little to no horror elements on display here. It’s quite upfront with its kung fu comedy hijinks. Whether it’s watching Gordon Liu hopping as fast as possible while being chased or the sort of fish-out-of-water elements when our main protagonist must take on his own apprentice in the second half and teach her, trial by fire, how to handle vampires, The Shadow Boxing is certain to hit a few funny bones in the process. It doesn’t always work in the most efficient manner, but it’s damn fun and entertaining.

Being as the legendary Lau Kar Leung directs this film, it’s quite expected that the film would have plenty of kung fu on display. The Shadow Boxing isn’t his normally fast paced and highly technical choreography, as it tends to use most of its kung fu set pieces for comedic effect, but it does retain that same entertaining value that the comedy elements bring to the film. Wong Yu performs a sort of hopping vampire influenced style of kung fu, complete with plenty of gimmicks and silly moves, and this makes for most of the memorable pieces in the film. Sure, seeing Gordon Liu show up in the finale with his deadly Eagle Claw kung fu lends a more traditional feel to the end, but he’s more or less shown up in most sequences by our main protagonist. A weird thing to say as a huge fan of Gordon Liu myself, but the film was never his vehicle.

This is not a film for everyone and many kung fu connoisseurs may not dig into the film as the comedy comes first and foremost in how it proceeds to tell its story. However, the blend of kung fu and comedy works for the story and it remains a massively amusing film with plenty of charm to spare. The Shadow Boxing is not going to be making my list of best Shaw Brothers flicks, but you could easily do worse than this.