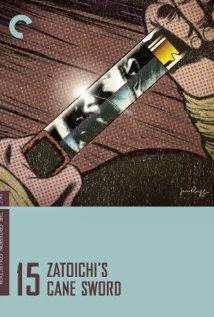 
“You know, Boss, I’m not the only blind man here. There’s not a man in this room that can see. That’s why I decided to drop in. I figured it must be a gambling joint for blind folk.”

On my trek to work my way through the Zatoichi franchise, there is one thing that has shown through as the key for the continued quality throughout each flick: story telling. While the sword slashing action is usually a fun aspect to the films, the story has always come first. For the fifteenth film featuring our favorite neighborhood blind swordsman, Zatoichi’s Cane Sword, it’s this reliance on strong story telling that makes it so damn good.

Zatoichi (Shintaro Katsu), while on the road, finds himself traveling with a theater troupe to a small village. When there, he discovers an old man who tells him that his cane sword only has one more kill in it before it will break from his continued use. Taking this as a sign to give up his life as a wandering life, he becomes a resident masseur at a local in. It’s here that he learns of a new and dastardly boss looking to confiscate all the businesses under his wing. Zatoichi, who has taken to the family who has taken him in, prepares to defend them with or without his fabled blade.

Once again, Zatoichi’s Cane Sword is the kind of film that plays out naturally and with remarkable flow as it builds its story and character. More akin to earlier films in the series, it actually pulls away from the action and instead focuses on a more character driven thriller aspect instead. Discussions about Zatoichi’s cane sword are played with the deepest of thoughtfulness, stressing how the blade has become as much of him as a personality, and this breathes extensive (and rather refreshing) new elements to the Zatoichi character. Combined with the stellar secondary performances from various cast members, including a phenomenal performance from Shiho Fujimura as the head strong daughter of the family that takes Zatoichi in, the story damn near tells itself under the guiding hand of director Kimiyoshi Yasuda.

It’s enough so that the lacking action of the first two acts rarely affects the audience from understanding the fear of the villains or how naked Zatoichi himself feels without his titular sword. It builds and builds, layering on frustration by how the plot is fitting against our heroic blind swordsman, that when the final act erupts in action – notably against a gentle snow fall in the dead of night – it’s a release of energy that pours from the screen. At this point, we get to see plenty of Zatoichi tropes and formulas that an audience would expect from the franchise – including Zatoichi’s continued and almost humorous confidence displayed in his ‘duck song’ and dance routine as he entertains the villains and a moment where he (quite literally) cuts his way out of a barrel while killing a handful of baddies, but the film is built so that none of it feels tired or worn.

Zatoichi’s Cane Sword is not perfect, as there are almost too many characters and too much story to feel completely drawn into the various conspiracies and villainous tactics, but the brisk ability of the film to tell its tale and still drive a handful of character arcs is very impressive. The finale fight is something to be remembered too by Zatoichi fans. After the stumble in quality that was Zatoichi’s Pilgrimage, this fifteenth entry comes as a wonderful return to form.