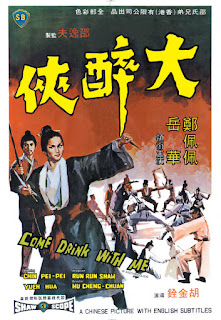 In the early years of the Shaw Brothers company, the studio struggled to really find their own voice and style in movie making. With the help of some visionary directors and brilliant actor signings though, they quickly found their path. One of the first films to establish Shaw Brothers in the direction is the iconic Come Drink with Me. The first and only film that King Hu produced for Shaw Brothers, this martial arts film is both grounded and epic, delivering insightful characters with focused and detailed visuals. It is easily one of the best martial arts movies ever delivered.

When the young son of a high ranking official is kidnapped by a vicious gang, they demand their leader be released from prison or he will die. The government has other plans and they send a deadly assassin named Golden Swallow (Cheng Pei-Pei) to negotiate with the gang. On her way there though, she encounters a talented drunken fighter Drunk Cat (Yueh Hua) who complicates things…but may have a solution to all of the problems.

While Cheng Pei-Pei garnered a lot of attention for her portrayal of the heroic and deadly Golden Swallow for this (enough so to spawn one sequel for the character), the most intriguing aspect is that she is only one of two protagonists. As the film starts off, it focuses in on Golden Swallow and her quest to find the gang that has an official held hostage. By about half way through though, the film shifts to add and then focus on Drunk Cat and his story. By the final act, Golden Swallow has all by disappeared from the narrative – particularly as the audience learns of the gang’s connection with Drunk Cat’s brother. The final duel doesn’t even have Golden Swallow in it. Luckily, Come Drink with Me rocks the narrative so well and King Hu executes it with such flow, that this unusual shift in story focus and character focus feels utterly natural and effective.


The rest of the film is also of this high quality. Come Drink with Me features a slew of impressive performances, top-notch effects, and stellar fight pieces. King Hu takes his knack for paining visuals (seriously he lathers each shot in layers and depth) and uses the scoreless fight pieces to punctuate the combined efforts of the other elements of the film. The fighting is not the highly technical work you might see in later Shaw Brothers productions and is more akin to the brief bursts that one would see in a samurai flick, but it’s effective and still impressive. The film also makes great use of it’s locations and deep thoughtful set pieces. Whether it’s the inn where a good portion of the first act occurs or the house of Drunk Cat, King Hu and company make use of locations to really help paint the story.

Come Drink with Me is a lot different than one would expect from a Shaw Brothers production thanks to a story and character driven design that pulls away from the action set pieces and focuses a bit more on atmosphere. The resulting film though is massively impressive with its twisting plot progressions and deep thoughtful character work brought to life from high end performances the steep visual work of director King Hu. This is the kind of film every martial arts fan should have, if not worship, for it’s strengths and unique turns.