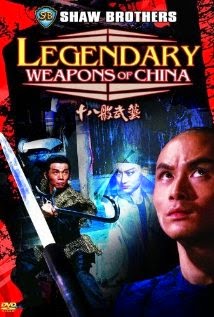 Just like with any older or long running subgenres, there will be films that become fan favorites for a variety of reasons. Films that garner a cult like following, good or bad. Legendary Weapons of China is one of those films. Even within the genre of action, subgenre of martial arts, and the subgenre of Shaw Brothers films, this film gathers a lot of attention. Going into the film, it’s hard to shake the hype and as a Shaw Brothers fan myself I was expecting pure gold. In many ways, the film is golden…just not all the way through.

When a leader in the Boxer Rebellion, Lei Kung (Lau Kar Leung), disbands his faction of fighters, assassins are sent from the other factions to find him and dispose of his traitorous ways. As Ti Hau (Hsiao Ho) and Fang Shao Ching (Hui Ying Hung) find themselves getting closer to the mysterious leader, they discover that his own rebellion might not be as traitorous as they assumed.

Perhaps the biggest shock going into Legendary Weapons of China was how the film starts. The first act is primarily composed of seeing various assassins assigned from various factions to hunt down our mystifying ‘traitor’ in the film. This portion uses a lot of gimmicks that director/choreographer Lau Kar Leung usually steers away from – namely things like magic, mind control, and campy fantasy like elements. Granted, this does come full circle in a sort of meta-aspect in the final act (more on that in a minute), but the introduction of a slew of characters and various subplots makes Legendary Weapons feel scattered and disoriented for the first half. As an audience we are left wondering many things that are ill explained or brushed over as the film speeds through to get to the main plot and it leaves a bit of a sour taste. There is one random subplot featuring a slapstick and humorous fight sequence with Alexander Fu Sheng that entertains in some fun ways, even if it feels utterly tacked on.

The second half though, really does congeal the various subplots into a much more focused and pleasing whole. Once the mystery of 'who is Lei Kung' becomes known to our characters, the protagonist assassins from the first half step back to allow the true highlight of the film to take center stage: Lau Kar Leung. For all the magic and tricks that are presented in the first half, the second half seems to display a much more Lau Kar Leung-like meta message to the events – that no matter what sort of bullshit spectacle you pull, nothing beats a good old fashioned choreographed fight. The finale is built in this concept as he easily takes on assassin after assassin, preaching his beliefs, with the various 18 weapons of the title. If anything, the film’s scattered and eye-rolling gimmicks of the first half seem specifically against the grain so that not only do our protagonists and villains understand the politics of Lau Kar Leung’s character, but the audience understands his politics of movie making as an actor, director, and choreographer.

It’s decently obvious to see why so many kung fu fans worship this film. Legendary Weapons of China has a little of everything that the Shaw studio did well: gimmicky fantasy elements, a bit of slapstick humor, a mystery to unfold, big production values, and the stunning choreography of Lau Kar Leung. Too often the film has trouble blending these things into a cohesive whole. Luckily, the final act is awesome enough that it might make any issues a viewer has with the film up to that point moot.