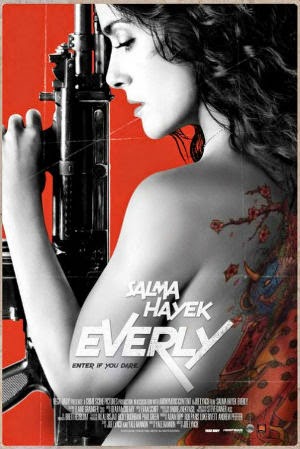 “That’s a lot of dead whores.”

After the debacle of edits and release dates that plagued Joe Lynch’s last picture Knights of Badassdom, it was somewhat of a relief to see his next picture Everly pop up so quickly. I had my hesitations for a horror and humor director to take his craft into the action realm. Yet Lynch’s obvious love for grindhouse and cult action cinema shines brightly in Everly as the film mixes the influences of early Robert Rodriguez and Takashi Miike into a rather potent and extraordinarily fun film. It’s the kind of picture that might alienate a more mainstream audience with its quirky humor and gore, but for genre fans it’s the kind of flick that hits all of the right buttons in the right sequences.

Everly (Hayek) has had enough. After being kidnapped and made to be the slave girlfriend of yakuza boss Taiko (Wantanabe), she finds herself at the end of her rope. With a young daughter being brought up by her mother, she makes the decision to get out no matter the cost…or die trying.

As it was mentioned above, there are a few reasons why Everly was dumped to VOD and limited theatrical releases. Namely, it’s the kind of weird action flick that a mainstream American audience simply would not grasp and support. Hayek, despite a spot on turn as the titular heroine in the film, is not the A-list name she was ten years ago and Lynch as a director is something of big name mostly in cult circles. This doesn’t stop either of them from giving Everly their all and really maximizing the material to its full modern grindhouse potential.

The term ‘weird’ is used in a lovingly way with Everly too. On top of the rather cut and dry concept at play here with the ‘escape the building’ idea and the video game like waves of baddies that show up to prevent such (complete with boss battles like The Sadist and Attack Dog), Everly uses its Japanese yakuza streaks to outrageous benefit. There is a definite Miike influence in many of these aspects, particularly the use of gore and dark humor in balance with one another that brings to mind the era of Ichi the Killer, and this is combined with a more streamlined and Hollywood punch tactic. The film does take some strange turns – including the previously mentioned Sadist character and a brief leap into some horror components, but it flows pretty impressively between the various influences and styles.

Shockingly, Everly packs some dramatic aspects to balance out the fun grindhouse pieces. While the inclusion of her daughter and mother seems a bit forced in moments, Lynch and company play it pretty close to the chest and throw some great curves into that plot progression to make it work. There is even a great sort of friendship dynamic that the Everly character makes with one of the yakuza men she has shot. Not to mention the final moments of the film with the slow chimes of a Christmas song that punctuates the more dramatic beats in the film. So for those questioning the sheer absurdity of Everly, know that it does throw in just enough depth to balance it out.

While the expectations for Everly were mixed to begin with, the resulting film was much more entertaining and effective than one could have hoped for. Lynch has an obvious love for the grindhouse action films of yesteryear, but the modern sensibilities to not make the film an homage to such. The results are gory, funny, and amusing to say the least. Everly is a massive surprise this year even if it’s more or less geared towards the vulgar auteur crowd.