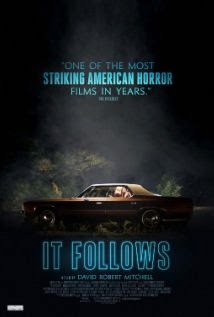 The hype machine was on overdrive for It Follows. Despite very limited releases, reviews and strong word of mouth continued to boil to the surface of the internet that this film was a modern classic. When the opportunity to see an early screening came out, I was quite eager to leap on that – and I’m glad I did. It Follows is the kind of modern horror film that completely lives up to the hype. It’s an original feeling film, pulsating with refreshing restraint and yet adamant to building itself on classic tropes without ever deviating from feeling like it wants to be anything but itself. Not only that, but it is easily the scariest film I have seen in years.

For Jay (Monroe), life is decently simple. She’s young and worry free, living with her family in relative safety. When her new boyfriend intentionally leaves her marked by an entity hell bent on her death, life takes a wicked twist. Her friends can’t see it. It never stops walking. It can’t be stopped. Can it be passed on?

It Follows has a somewhat silly premise. While I fully intend to not spoil a lot of the very clever twists and plot progressions of this film, there are some old school elements to its premise that could be laughable. How the ‘entity’ (it’s never explained what ‘it’ is throughout the film) is passed from one person to the next seems like a bit moral bludgeoning. Don’t let it fool you. Director and writer David Robert Mitchell handles the narrative, characters, and plot progressions so impressively well that not only does one buy into the rather outrageous concept, but he strings you along like a doll scaring you when he deems fit.

Mitchell accomplishes this task in a variety of ways. His old school approach to camera work and tension are the biggest. An opening shot features a spinning camera as it follows a random young woman, terrified and running in a big circle in the middle of a suburban road, while an intense pulsating synth score punctuates the terror of the thing she is running from…nothing. This is just one of many slow burn tactics that It Follows utilizes to build an overwhelming sense of dread. The combination of this score (seriously, the score is fuckin’ heartpounding) and Mitchell’s penchant for long, still shots of character dialogue or setting placement makes us panic even when nothing is there. Consistently, the viewer is pulled to pay attention to our relatable and youthful protagonists for their continued maneuvers to outrun their villainous chaser, but one of our eyes is always glued to the background, looking and, dare I say, pissing ourselves if a person pops up slowly walking towards us. It’s pure atmospheric dread.

This sense of unrelenting dread permeates everything. Enough so that even mundane jump scares had the theater audience screaming like school children. It Follows takes its time to build to this point, including a rather unnerving date in a theater for the first act, but once the film establishes its set of protagonists and what we should be afraid of, never does it feel as slow burn as it is. It feels like ‘it’s’ always there. A tactic that unabashedly puts the audience in the protagonists’ shoes. When the film decides to kick it to that next level of fear, including an attack on a beach or the trap that is laid in the finale, it throws down with that physical horror of conflict to a satisfying degree too.

There probably should be an apology here for leaving this review rather vague on the actual events of It Follows. This is because I truly and utterly believe that the experience of this film is ten fold greater than any of the individual elements. Sure the atmosphere and score are stunning. The scares are effective. None of it matches that sense of dread that It Follows uses to terrifying its audience. I was on the edge of my seat, clenching my jaw, holding my breath. It’s that feeling where It Follows succeeds.

I will now forever have an irrational fear of people who slowly walk towards me. Damn you, It Follows, damn you to hell.