Paranormal Activity: The Marked Ones (2014) 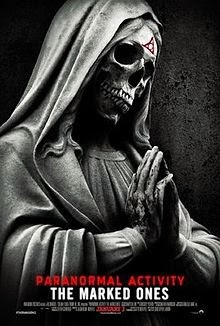 Like most popular horror franchises, “Paranormal Activity” is divided amongst the horror aficionados. Love it or hate it, it still banks quite a bit for its production cost in theaters and they don’t seem to be slowing down. In fact, there is supposed to be two of them released just in 2014 alone. The first is the rather intriguing “Paranormal Activity: The Marked Ones,” which is more or less a spin off on the series than a direct sequel concerning the events around our haunted sisters in the main franchise. Ironically, because it tends to cover new ground and go with a slightly different tone, “The Marked Ones” is handedly the best sequel in the franchise…one that might be surprising in many ways for both fans and detractors.

Jesse (Jacobs) just graduated high school and is flying high with loyal friends and a family that loves him. When a weird occurrence concerning his friend from school and the odd older lady that lives below him perks his curiosity, he finds himself marked for something evil…and it’s going to take all of his friends to help him find out just what is happening.

While “The Marked Ones” doesn’t necessarily strike itself as a full original entry, there are plenty of “classic” (read: mundane) “Paranormal Activity” moments to be had like things flying at the camera and long shots as the audience held it’s breath waiting for something to happen, it does happen to find a sort of renewed energy with its spin off tale. Instead of focusing on the “haunting” of said family/people, it focuses more on building stronger characters and a slightly different arc for the plot. Less about random ghost events and more about supernatural events that include super human abilities and a mystery involving the neighbor. Not to give too much away plot wise, but this allows the film to take some different routes including how the best friend becomes the protagonist in the latter half and having to deal with inhuman powers.

The film also benefits from a new setting. The Latino influence is something reinvigorating to the series and new elements like gang life-styles, which leads a massively entertaining finale when they go to siege a house with a couple of gun-toting gangsters, give the series a breath of fresh air. It may not always make sense, but dammit it was ten times more entertaining than the last few entries.

Occasionally “The Marked Ones” falls prey to the same predictable elements of storytelling and an ending that really doesn’t make a whole lot of sense (here’s to hoping that answer a few of those plot holes in Part 5), but overall I was pleasantly surprised with my entire experience here. It builds the mythology, adds some new elements, and still remains fairly true to the structure and style of the series. “The Marked Ones” is a reminder of how and why this series became popular to begin with.