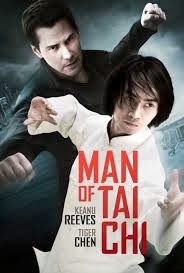 I’m still baffled by the continued existence of Keanu Reeves as a leading man in film. As I write this, his current film “47 Ronin” is crashing and burning before our very eyes as it bombs in the American box office, and outside of handful of films like “The Matrix” and “Bill & Ted” his previous films don’t spell out A-list star. So when it came to “Man of Tai Chi,” I’m sure I’m not the only one that held their breath considering it’s his debut directorial effort. Lucky for us, his work as a director is much more proficient then his ‘shaolin wooden man’ acting style and this low budget martial arts flick comes off as a surprisingly efficient and competent film.

Tiger (Chen) has been living the standard life. He works much too hard for so little pay, his romantic life is essentially non-existent, and opportunities seem scarce. He is studying to be proficient in tai chi, but his frustration with life is most certainly affecting his chi. When he receives a mysterious letter offering him a job working ‘security’ with Donaka Mark (Reeves) he can hardly believe his luck. Getting paid ridiculous amounts of money to fight? But not everything is as it seems and Tiger is about to learn the true meaning of strife when things start to take a slide for the darker.

While Tiger Chen has had his fair share of praise as a stuntman in key films like “Crouching Tiger, Hidden Dragon” and the two “Matrix” sequels, his first leading man performance here was something of a mystery to me initially. Yet, he ably handles the material well here. Despite some of the overzealous classic Yuen Woo-Ping fight choreography and some of the modern visual choices by director Reeves, the film relies a lot on the subtle character arch of Tiger Chen and he does it rather well here. Keanu Reeves plays the villain of the film and hams it up enough to counterbalance Chen when needed and, believe it or not, it works.

As for the plot, “Man of Tai Chi” does something rather interesting. There are plenty of films that try to blend modern cinema with classic kung fu themes to varying degrees of success, but “Man of Tai Chi” does both with remarkable extremity. The film pulls a rather modern punch with the televised underground fighting plot and the uber-modern Donaka as the villain, but it adds in a definite streak of classic kung fu mysticism into the picture with the classic style temple and the master/student relationship. Occasionally the film runs a bit cliché (deciding between selfish motives and stronger moral values) and it’s often a bit predictable, but with the style and fun fight sequences never does it come off as boring.

While Keanu Reeves might not be a selling point as an actor for most critics, “Man of Tai Chi” proves that he might be a selling point when it comes to directing. His debut is a fun and intriguing blend of classic kung fu and modern action and even if the film runs a bit close to being run-of-the-mill, it does it with enough charm and finesse to sell the whole thing.