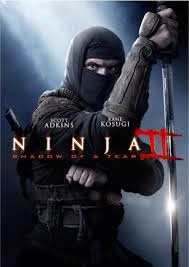 The duo of actor/fighter Scott Adkins and director Isaac Florentine has to be one of the most dynamic that action films have seen in the last few decades. When I first saw "Undisputed II" I knew there was something special happening. With "Undisputed III" and the first "Ninja" under their belts, they have become something of a magic pairing that far too many people overlook. For their latest film together, the long awaited sequel to the B-grade awesome "Ninja" called "Ninja II: Shadow of a Tear," the duo might have put together their best film to date - one that takes its silly concept to darker corners with even more action.

Casey and his wife are living happily after the events of “Ninja.” Casey has become the lead teacher in the family dojo and she recently revealed she is pregnant with their first child. Things take a turn for “oh no you didn’t” when a mysterious assassin kills her brutally in their home. Now Casey has to exact a little revenge, old school style, and he will uncover a mystery that leads him all the way to the jungles of Burma.

While most directors will take their films into more complicated and high art directions as they go, Florentine has done just the opposite here. “Ninja II” is a simpler and more straightforward film. Yes, there might be a mystery that Casey has to go on a wicked wild ride for, but the motivations and execution of the plot are much more focused than the previous film. Gone are most of the subplots of fantasy like value with cults and rivalry and they are replaced with a more vicious and classic 80s style revenge plot. One man against the world. Ironically enough, less is obviously more here and this simplified and straight forward path for the film only benefits the entertainment value of the picture.

While the character of Casey might be a simpler one here, the shades are all the more poignant. The first film had him as this goody two-shoes type hero and for “Ninja II” they take him towards a much more subtle, but effective arc that turns him into one of the best anti-heroes of the last ten years. When Scott Adkins, who has most certainly come a very long way acting wise from his early days and still gets my vote to be the next Batman, states off that these drug dealers and assassins are going to need a lot more graves, you can’t help but cheer for him. Scott Adkins has most certainly come unto his own as an action star and between this and his turn in “Universal Soldier: Day of Reckoning” he can handedly hold a film on his own.

Yet, let’s be honest, it’s neither Florentine’s minimalist style nor Scott Adkins’ awesome anti hero that’s the true star of “Ninja II.” It’s the ridiculously awesome fights. As a martial arts fan, this film is a wet dream. Tim Man’s stunning choreography is in full display here as Adkins literally fights his way through all obstacles. Street fights, an unedited dojo throwdown, a police chase, jungle warfare, and a fiery finale personalized make “Ninja II” one of the best action films ever made. Adkins struts his speed and strength like it’s nothing and two key fights (Adkins v Tim Man and Adkins v Kane Kosugi) will have martial arts fan boys drooling on the floor.

“Ninja II” might not be a film to win any awards any time soon (that is until the Academy comes to their damn senses and adds a stunt choreography category), but it’s handedly one of the best actions films ever made. It’s simple, effective, and loaded to the brim with some of the best hand to hand combat in decades. A must see for anyone that loves martial arts.