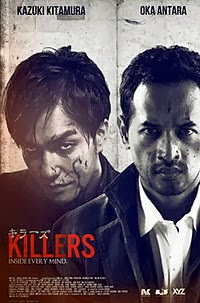 While I am somewhat ashamed to say that I have yet to experience the first Mo Brothers film "Macabre," I was lucky enough to score a ticket for their second full length feature "Killers" at the Sundance Film Festival. Outside of some short films, I didn't quite know what to expect from the new age masters of horror and I have to say that "Killers" was all sorts of visceral. One part brutal serial killer flick, one part atmospheric thriller, and one part character drama, "Killers" is the kind of film that rides the line between grindhouse and arthouse in all the best of ways. It's mentally disturbing, yet sort of beautiful in its weaving tale of two men connected by frustration in a modern world.

When Bayu, a man struggling to find justice as a writer and seeing his own personal life crumble, stumbles upon a serial killer uploading his kills online, he becomes somewhat obsessed with the idea. This killer, a Japanese man named Nomura, seemingly becomes obsessed with "his number one fan" too and when Bayu takes some vigilante justice and posts it online, a sort of rivalry ensues...culminating in two struggling men heading for a vicious ending. 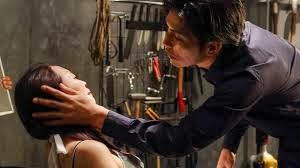 There is most certainly an intriguing element to "Killers." It's the weird ability that The Mo Brothers have to craft a film that is essentially a schlock killing film about killers filming themselves and somehow pulling some significant social commentary out of it while keeping both lead characters fairly connected with the audience. Both leads are fantastic in their respective roles. Bayu, the character whom we are to connect far too easily with as his spiral into violence feels justified to correct wrongs with our world, essentially represents morality in a frustrated man. Nomura, the character that we struggle to understand but find ourselves rooting for redemption due to his irresistible charm, represents the immorality of the film and one we hope to see find his path. This humane essence of the film, partnered with a healthy dose of 'social media' criticism and the shortcomings of a justice system with too many flaws, makes "Killers" insanely deep for the brutal violence and horror tags it will receive.

On the other side, "Killers" is a brutal, brutal horror thriller too. Blending the story of two different men together, we are taken down a road that showcases some stunningly real death sequences. The Mo Brothers never shy away from the gore or the violence (giving the atmosphere some much needed release) and outside of one odd CGI moment towards the end, it's phenomenally unnerving how they go about it all. Each of the kills is something of a character growth point for our two leads (crazy how that can work in a great horror film) and while some of it is very hard to stomach it works in a stunning fashion to balance out the character acting and strong writing of the film. 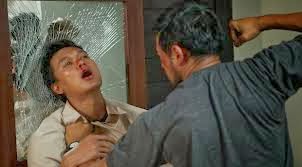 All in all, "Killers" is a definite must see for those willing to submerge themselves into a striking piece of narrative horror storytelling. It's a focused and vicious film that's unrelenting in its strong acting, strong direction, and eye-popping special effects. Plus it has great streaks of dark humor (including a police discussion that might be the best comedic set piece I've seen in a long time) that are splashed throughout, something that helps break up the tension nicely. "Killers" is not a film for those faint of heart, but if you are willing to swallow the bitter pill it's worth the time.