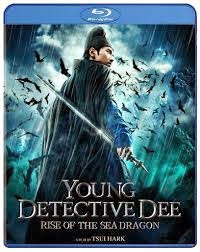 Tsui Hark has become something of his own worst enemy when it comes to his big budget action flicks. While his early career made use of the ridiculous to create fun spectacle, his current handful of films have transformed into a parody that mimicks that idea with terrible CGI and nonsensical scripts. Sometimes it works (the first “Detective Dee”) and sometimes it’s fucking awful (“Flying Swords of Dragon Gate”). This turn of events lead me to be skeptical of “Young Detective Dee: Rise of the Sea Dragon.” The prequel to his big budget fantasy Sherlock Holmes-esque flick benefits and suffers from the same elements that made the first one such a hit or miss film…and all the while it falls just slightly short.

Detective Dee (Mark Chao) is sent to help out a local police force in one of the major cities and when he arrives he finds out that a portion of the navy has been sunk by a "sea dragon" that the locals are scared shitless about. To add problems to the matter, local hot shot Detective Yuchi (Feng Shaofeng) only has ten days to solve the mystery or he loses his head. With a local courtesan (Angelababy) being haunted by a dragon man, mysterious assassins, and a monster in the sea these two detectives are going to have their hands full solving this one.

One thing that is for certain, it is that China is getting better and better at incorporating the ridiculous CGI elements into their big spectacle films. This might be the most cohesive special effects that Hark has used yet as there are only a few moments that made me cringe, including perhaps one of the best unintentional humor injected escape moments when Dee rides a horse across boat pieces to make it to the other ship. It’s not great, but it could have been the “Flying Swords.” While I still much prefer the practical effects, and there is some here like the dragon man, the CGI isn't quite as bad as I've seen if before in these kinds of films.

The problem that does remains with “Young Detective Dee” is that the story is so utterly fucking ridiculous that it takes away from the interesting detective elements that form the foundation of the film. Mark Chao plays the younger Dee (replacing the phenomenal Andy Lau) and his charisma on screen helps, even if it's not quite as intriguing as his predecessor, but the plot is so out there that rarely do we get to see some of the solid acting that is on display here. We get dragon men, a giant sea monster, poisoned officials, and a detective rivalry that generally makes the film a little too overcomplicated for its own good. By the time we end up going to Bat Island (I know, I hope that's a real place too) I was a bit overwhelmed. In a way it’s a blast of cheesy fun if you are looking for that outrageousness in your films, but rarely does it make for the captivating mystery film that the premise of Detective Dee holds.

Luckily, Tsui Hark isn’t all spectacle and can still shoot a strong action sequence. While most of the action requires the high flying wire work and far too much CGI weaponry, it’s effective in the entertainment area. When Dee’s rival Yuchi gets mad and literally leaps through the roof to find him, I cried from laughter and had to rewind the scene. I don’t necessarily know that was the response that Hark was shooting for, but dammit it might be one of my favorite moments in one of his films in a long time. This is just an example of how Hark can still be fun.

If you saw the first “Detective Dee” then you know generally what to expect here. The CGI is slightly better, the plot is more ridiculous, and the charm of the series remains even if half of it makes little to no sense (including the crazy doctor with an ape arm). Take it with a grain of salt and you might enjoy it as true pulp entertainment. Otherwise, you might be apt to visit a slightly more serious film.